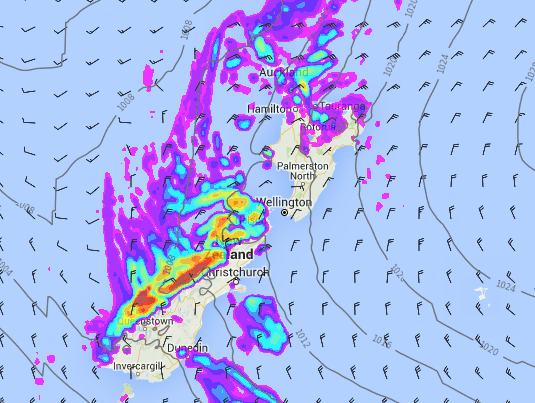 The big high that gave us a gorgeous settled long weekend is today causing a very blustery nor’east flow across the country with big swells and isolated downpours.

WINDS
Strong winds from the nor’east are blowing across a number of regions today with gusts to gale around some exposed areas.

The angle of the wind flow, being nor’east, feels much stronger to many people being the opposite of our prevailing west to south west wind.  In cities like Auckland the nor’easter can often break small branches which leads to isolated power cuts – while a sou’west wind of the same strength may not cause any issues at all.

For the most part winds are well below damaging today but with strong gusts, especially around the ranges in the south and coastal areas in the north, there may be a few isolated issues here and there.

Winds will gradually ease across the day and night as the large high continues to slowly track eastwards out over the Pacific Ocean and away from New Zealand.

RAIN
Rainwise, the rain clouds are definitely broken up and fractured today – no widespread rain bands although the West Coast has the largest and most intense area of rain with a chance of localised flooding in the most intense downpours.  Heavy downpours may also move into the Nelson region with a little spillover into the east – but not much.

In the north, the bulk of the heaviest downpours is out at sea, but some will come into northern (and eastern) Northland and then further down towards Bay of Plenty later today.  Generally speaking, a number of regions have the chance of a heavy downpour today, but conditions are fairly dry with mostly showers and those blustery nor’east winds.  Many places will be drier rather than wetter today, but the risk for a really heavy sub-tropical downpour is there for some today.

SWELLS
Meanwhile, very dangerous swells of 4 or 5 metres are pushing into the upper North Island’s northern and eastern coastlines today from Northland to East Cape.  Avoid the dangerous sea in these areas today.

See our MAPS tab for the very latest WIND, RAIN and SWELL maps for the next 14 days.