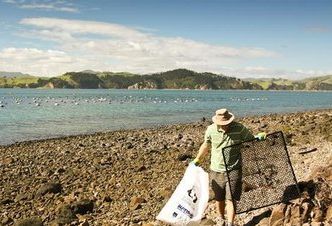 Volunteers have picked up 34,500 litres of rubbish from the Coromandel coastline in three days – more than a full shipping container.

Sustainable Coastlines spokesman Sam Judd said volunteers were dropped off to sometimes remote coastline by about 18 boats, from the outlying islands of Rangipukea in the south to the Happy Jacks in the north.

People came from Auckland, Hamilton and Wellington as well as Coromandel itself to help.

The cleanup effort was only on the west coast of the Coromandel peninsula, where a large amount of rubbish ended up after floating east from Auckland. Sustainable Coastlines organises similar large-scale cleanups around New Zealand, but it was the first time they had done so in the Coromandel.

“There was a really positive feeling from everyone, especially the locals,” said Mr Judd.

“We were really, really pleased with how many locals turned up with their boats and just helped us out. And everyone wants to do it again, because it was a lot of fun.”

At least two-thirds of the rubbish was collected on Saturday, but the momentum was maintained on Monday and yesterday with the help of 400 schoolchildren.

Local marine industries also lent a hand, with mussel farms – the source of some of the rubbish – providing staff members as well as two large mussel boats with cranes.

“They brought their boats along, and their crew and trucks along to help the event. So there’s no way we would have got anywhere near that total if we hadn’t had their assistance.”