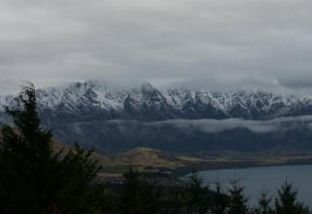 More than 250 skiers who have spent the night in a Canterbury skifield’s cafeteria are hoping to get off the mountain today.

It comes as the South Island continues to deal with the after effects of a massive dump of snow throughout Canterbury and Otago which closed roads, airports and services.

The skiers were stranded up Mt Lyford, 2km from Waiau and 60km from Hanmer Springs, after the risk of avalanches on the road was deemed too high for them to come down yesterday afternoon.

Skifield owner Doug Simpson said he and other staff will go up the mountain as soon as there is good visibility.

He said they will assess the avalanche risk and deal to it with explosives.

Mr Simpson expected to be able to get people out of the cafeteria by about 9am, where he says everyone is being fed and kept warm.

Staff will hit the hill as soon as they can see what’s happening, Mr Simpson said.

“We’ve got two snow groomers we’ve got down the hill so we’ll load them up with supplies, head on out, assess the avalanche risk and deal to that with explosives on the way out.”

Mr Simpson’s wife and his son’s fiancee are among those who spent the night on the mountain.

MetService last night forecast Milford Rd would receive between 5cm and 10cm of snow from 7am this morning through to midnight.

Snow is expected on Arthurs Pass until mid morning, with 4cm to 8cm possible.

Light snow flurries are expected this morning on Lewis and Lindis passes, however snow is not expected to accumulate.

In the North Island, the Desert Rd is expected to recieve snow flurries this morning above 900m, however significant amounts are not expected to settle.

Chains are essential and towing vehicles are prohibited on SH73 from Arthurs Pass to Otira, SH6 from Haast to Makarora, SH94 Milford Rd (Plato Hill to Lower Hollyford turnoff), and SH87 Outram to Kyeburn.

Motorists across the South Island are warned to be cautious of black ice.

Meanwhile Wanaka motorists have been stocking up on fuel, as supply trucks have struggled to reach the resort town.

Caltex ran out of 95-octane on Sunday and 91 on Monday morning, while BP petrol and diesel supplies ran out on Monday evening. Stations were restocked yesterday afternoon.

Mobil and Shell truck stops in Wanaka still had fuel, but only customers with pin-encoded fuel cards could access it.

Wanaka BP Service Station manager Tony Myers said that when the news spread the whole town was running out of fuel “you can imagine what happened. We just had queues and queues … and as soon as people came down off the skifields it was bedlam.”