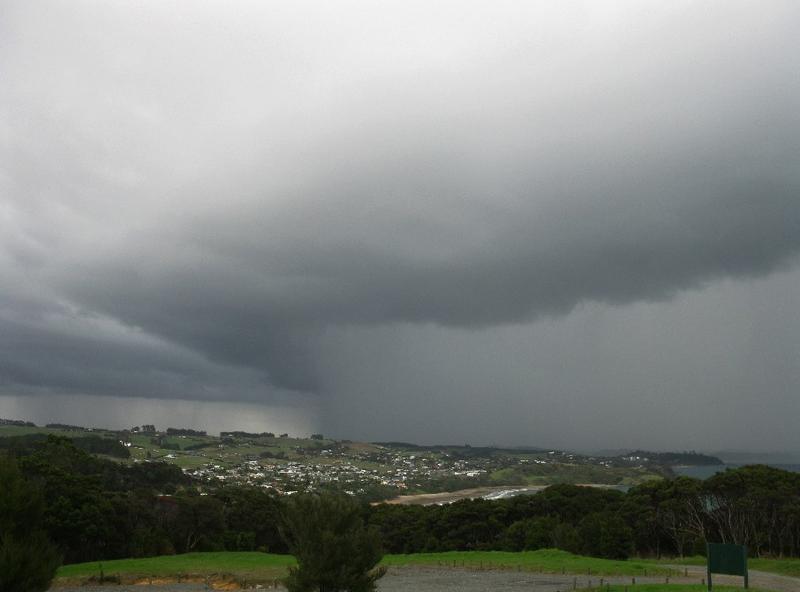 Campers around the country are waking to a damp 2012 after days of heavy rain closed roads and forced the evacuation of holiday spots.

Up to 120mm of rain was predicted to have fallen in the Bay of Plenty region over the 24 hours to 9am today and slightly more on the Tararua Ranges and coastal Wairarapa. Storms in Tongariro National Park were expected to dump 25mm per hour.
A car was swept off a road near Whangamata yesterday, but the two occupants made it to safety. About 100 campers at the nearby Wentworth Valley Camping Grounds were safe. Local farmer John Shearer was busy yesterday helping campers out – and in – by tractor.
Shaun Dunlop, 28, had travelled from Wellington with his partner Iva Novakov for a New Year holiday at the Wentworth camp.
“There’s just been a heck of a lot of rain falling over the last two days,” he said. “My van blew up going through the ford.”
Quinn Robinson, 16, was with about 30 friends from Whangaparaoa at Wentworth Valley and said they would mark the New Year by dancing in the rain.

In Northland, Whananaki township, north of Whangarei, was cut off after flooding made the main road impassable at 10am yesterday. Whananaki Beachside Holiday Park had some flooding but only four people had left because of the weather, a staff member said.

SH29 in Tauranga was closed for a couple of hours because of a slip. Tauranga police said there had also been a number of other minor slips and isolated minor flooding in the area.

In the hardest-hit areas of Nelson, Rocks Rd reopened yesterday afternoon after being closed on Friday by flooding.

Police were still advising against any unnecessary travel and were particularly concerned about cyclists riding in difficult conditions and creating risks for other road users.

Weatherwatch.co.nz analyst Philip Duncan said the worst of the weather was over.

By John Weekes, Imogen Crispe and Cherie Howie from NZHerald.co.nz

I do wish you and the media would stop lumping the whole lower 2 thirds of the south island into your storys about how the county is having a crap new year holiday! Have you not even looked at the temps and weather we have been getting? we are camping at lake benmore and its been around the mid to high 20s and 32 today! central otago has been hot with wanaka and the likes into the high 20s, the west coast has been hot too with hoki having 27C yesturday.
Weatherwatch not North watch please.