Wintry southerly fades by Saturday, the latest on the current weather: 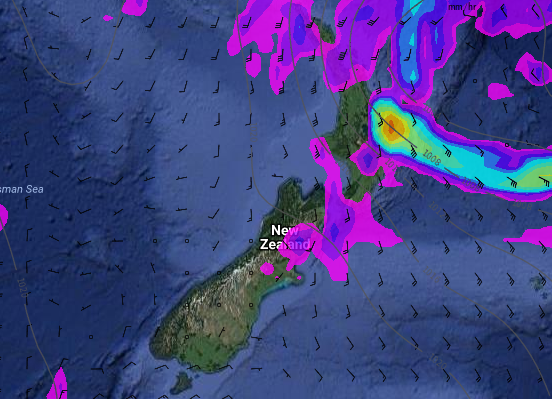 The narrow but intense band of rain that brought some flooding to Wairarapa and directly over the hills into Manawatu is now moving northwards through Northern Hawke’s Bay and easing behind it.

The rain band has shifted angles and is now sliding in over the Hawke’s Bay Ranges and into Bay of Plenty and Rotorua area with heavy falls. Snow will be heavy on the ranges along this eastern and central part of the North Island.

Snow flurries continue to fall in Central Plateau but with the moisture sliding northwards it will gradually ease back around the central mountains this afternoon and tonight. Some highways may start to be able to be reopened later today, depending on the weather obviously.

The rain is NOT yet over for Wairarapa area, with some heavy downpours still possible today especially south of Masterton. But generally this heavy rain is sliding north east towards Gisborne today and then out to sea on Saturday.

RAIN FORECAST:
As of late Friday morning the heaviest rain lies draped over Hawke’s Bay, Gisborne and parts of Bay of Plenty.
By Friday evening the bulk of this wet weather will be over the East Cape and Gisborne area.
By dawn Saturday most of the rain will have cleared the eastern North Island, just a few showers remain into Saturday for some.

WIND FORECAST:
It’s blustery in a number of North Island places today. Strongest winds are currently BUILDING in the Auckland region, and will become blustery into Friday afternoon. This is the back end of the system and winds will again ease back tonight.

It may become blustery in a few other exposed places today around the North Island as the southerly quarter flow kicks in and finally crosses the country to depart to our east.

Windiest weather on Friday Afternoon will be: Auckland, Hawke’s Bay, Wellington and some parts of BOP.

Winds or breezes overnight may keep frosts away from some places that traditionally see a frost after a cold snap like this. The southerly quarter winds will continue overnight for much of the North Island, but do fade early on Saturday in many areas.

In Wellington winds are no longer sustained at gale force as of 11am Friday and the gusts are now dropping into the 60km/h range. Winds will continue to slowly ease in the Capital across today and tonight.

HIGHWAY CLOSURES REMAIN DUE TO SNOW/ICE:
Snow is heavy through Bay of Plenty and Hawke’s Bay ranges, also some South Waikato ranges.
As a result of the weather conditions the following highways remain CLOSED as of 11am Friday:

BLACK ICE:
Black ice is frozen water on roads that’s as slippery as a skating rink but invisible to see. With temperatures warming up more at day but still sub-zero at night through some inland highways we may see snow melt re-freezing at night and causing more highway closures or delays. Please take extreme care driving overnight tonight and Saturday morning. Black ice risks fade quickly into Sunday and Monday, which is the good news.

WHO GETS THIS INCOMING HIGH PRESSURE SYSTEM?
We all do!  The high is already pressing into the South Island (which is why this story doesn’t talk about the South Island other than this part!). Everyone gets about 48 hours of settled, dry, hopefully sunny weather.

Rain moves into the South Island’s West Coast on Sunday and possibly spills over into parts of western Southland and western Otago. This reaches the North Island on Monday.

Have a great weekend!