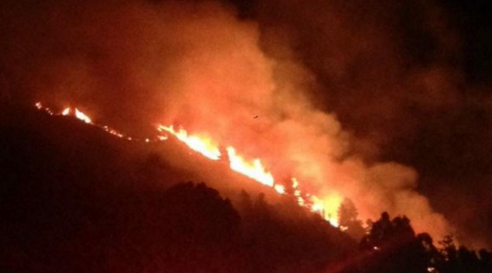 UPDATED: Windy, gusty conditions and steep terrain are making it difficult to battle a massive fire that has cut off the town of Hanmer Springs in the South Island.

Though 10 properties were evacuated all have been saved, their owners went to the sport pavilion early this morning.

“We’re still trying to contain it. We should have it well and truly under control by lunchtime”.

The fire is said to have started in the scrub along a nearby river.

Helicopters have been sent up to battle the blaze, which has led to the evacuation of a number of properties and has cut power to the town.

Strong wind gusts are fanning the flames in dry conditions with heavy vegetation.

Christchurch Police District Command Centre spokesperson Kath Pomfrett said all roads in and out of the southern town were closed due to the fire which broke out at 1.20am.

“We’ve got a large fire in steep terrain in the dark with winds of 60-70kph.

“We have a team defending the Ferry Bridge,” read the post.

At this stage residents of the township were not in danger.

“Once we get the fire under control we will get the power people through to assess and check their lines, poles and pylons and then we’ll get the power back on hopefully.”

Berry said there’ll also be another few hours of damping down.

Newstalk ZB’s Charlie Greenhalgh is at the cordon and reports that you can see smoke from kilometres away.

“You can smell a distinct stench of fire and there is more flames at the top of the hill as well.

“They’re releasing a very dark yellow, brown smoke into the sky. It looks very distinct against the white cloud. It’s not a very nice colour at all.

“It kind of smells like a bonfire at the moment”.

Four Square owner John Dawber said everyone’s trying to do what they can.

“We’ve just had few volunteers helping out in the store this morning. We’re making sandwiches and getting heaps of water and food to the fire brigade.

“I think the main focus and the concerns around the community is for the guys up there on the hill.”

The power is not expected to be back on until early afternoon.