Weather Video: Windy then (another) big low moves in for the weekend 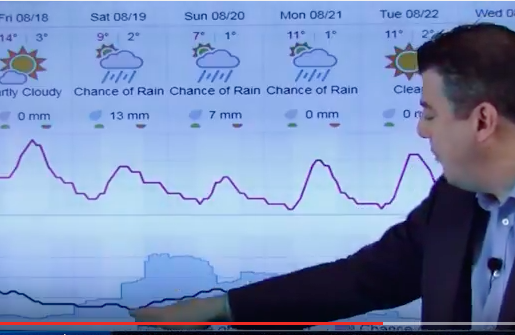 Things are about to warm up and get windier for many places. While Tuesday is somewhat of a transition day between yesterdayâ€™s rain and downpours and Wednesdayâ€™s developing norâ€™westers, itâ€™s Thursday and into the weekend that sees a mix of strong to gale force norâ€™westers, high temperatures in the east and then a weekend cold change which sees single digit highs in parts of the South Island while more rain and mild weather continues in the North Island.

Weâ€™re also keeping a special eye on Canterbury – thereâ€™s some good news as the norâ€™westers should bring a spell of warm, dry, weather this week – but the weekend again sees the chance of 10 to 40mm of rain in some spots. It’s one to keep an eye on but nothing locked in just yet.

We take a look at the latest forecast which has both positive and negative news for Canterbury and the rest of the country.