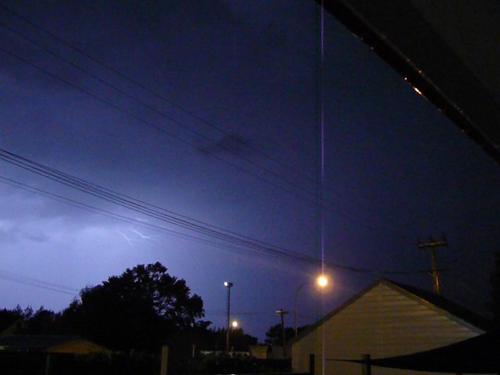 In a similar set up to the recent North Island thunderstorms a weak front is being destroyed by a large high – but is leaving behind a high risk of thunderstorms.

Government forecaster MetService says a weak trough is forecast to cross central and northern parts of the North Island this afternoon and evening.  “This trough, together with a slight cooling of temperatures aloft, afternoon heating and sea breezes is expected to produce scattered showers from Auckland and Coromandel Peninsula down to Taranaki and western parts of Bay of Plenty and Taupo”.

The forecaster says there is a “moderate risk” of a few thunderstorms this afternoon and evening in the broad area from south Auckland down to Taumarunui, but with a “high risk of thunderstorms in western areas of Waikato, Waitomo and also in Taumarunui”.

“Any thunderstorms that develop in these areas are expected to be slow moving and therefore could produce localised heavy rain in the 10 to 25mm per hour range,as well as small hail. For remaining areas of Auckland, Coromandel Peninsula, western parts Bay of Plenty, Taupo and north Taranaki there is a low risk of thunderstorms this afternoon and evening with with localised heavy rain possible” says MetService.

No thunderstorms are expected elsewhere.

Had a few good booms over Hamilton