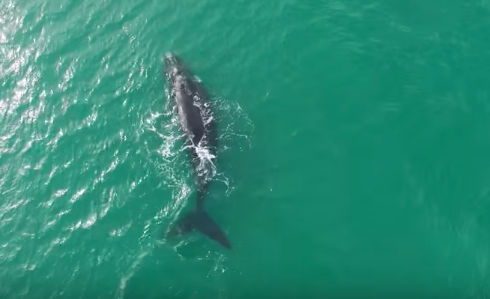 Watch as a beautiful and rare Southern Right Whale basks in the Omaha sun – described as a “beautiful, unplanned experience by the drone pilot.

This amazing footage was sent through to us by Sam Price from OXS Enterprises – you can check out his YouTube account here.

It’s believed the whale has been swimming up the east coast of the North Island, according to the Department of Conservation, and may be the same whale which was spotted off the coast of Mt Maunganui nearly three weeks ago.

â€¢ Southern right whales, or Eubalaena australis, are a baleen whale, which can be easily recognised by their strongly arched mouth, lack of dorsal fin and v-shaped blowhole spray.

â€¢ They are typically black in colour but can have irregular white patches. The flippers are large and paddle-shaped.

â€¢ Also known as Tohora, they are slow swimmers but very acrobatic. They are also inquisitive.

â€¢ Their head and lower jaw is covered in callosities – large, white, rough growths on the skin that are usually infested with parasitic worms, whale lice and barnacles. The number and arrangement of these is unique to each animal, making it possible to identify individuals.

â€¢ An adult southern right whale can measure between 11m and 18m in length; while a newborn is typically between 4.5m and 6m.

â€¢ They are migratory mammals, and are only found in the southern hemisphere.

â€¢ The are the only large baleen whales that can be seen from the beach, and can come very close to shore.

â€¢ They are typically solitary animals, or part of a very small group.

Seen yesterday at Langs Beach, Bream Bay. Played with a couple of local swimmers  – in wet suits- it basked around the rocks of Ding bay.