Home > News > Sharks and swimmers mingle on the Coroma...

Sharks and swimmers mingle on the Coromandel 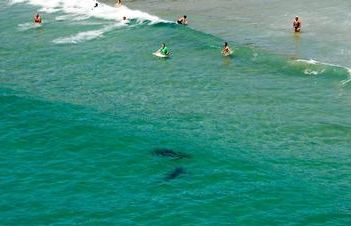 Just when you thought it was safe to go back into the water, the sharks have reappeared – and just metres away from unsuspecting swimmers.

But as the temperatures soared around the country yesterday, reports that up to 20 sharks were swimming in shallow waters weren’t enough to deter holidaymakers from taking a dip at Matarangi Beach.

Holly Davis, 34, said it was too hot for her to be bothered about “possible sightings” of sharks.

“Unless I see fins out there I’m staying in here,” she said. “We don’t have beaches like this in Wellington or weather like this, so you’ve got to make the most of it.”

The sharks, including one that was about 3m long, were spotted in the water by the Herald during a flight.

Locals say they were probably bronze whalers, which often come into the warmer shallow waters to feed on fish from the nearby estuary.

Swiss tourist Gerald Huber said he was more concerned about New Zealand’s ozone layer, or lack of it, and the high likelihood of being sunburned than being shark bait.

“If we were on the menu for sharks there would be a lot more attacks than there have been, but I don’t think it’s a problem.

“But if I hear someone yelling, ‘Get out of the water, there’s a shark’, I won’t be waiting here,” Mr Huber said.

Beaches around the country were packed yesterday as temperatures soared, with Kaikohe reaching 34.6C and Gisborne and Christchurch hitting 32C.

Evan Pu from Kaikohe’s East End dairy said it was a bumper day for icecream.

Outdoors, there was some wind, he said, “but inside here it is like a sauna”.

Around Auckland, yachties took to the water to enjoy the 10-knot breezes.

At Narrow Neck, Jamie Tuki and his family played touch rugby on the beach. He described this summer as “10 out of 10”.

On the grass verge overlooking the beach were Annika Hokkanen from Finland and Madeleine Grant from Sweden, who said the gentle breezes were beautiful. “It is awesome, compared to Sweden.”