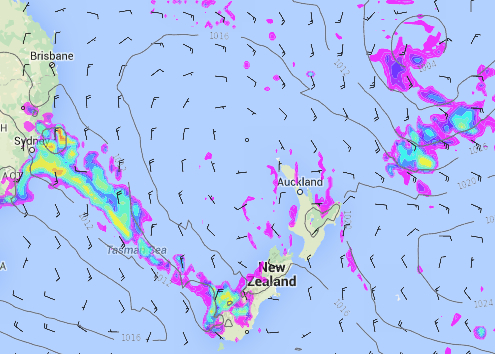 Tomorrow is the big day for cricket fans both here and around the globe – the first Semi Final of the World Cup at Eden Park, and it’s looking 50/50 at this stage as to whether we’ll see rain in the big city.

“Basically, weather conditions around Auckland will be bit cloudy and humid” says our Head Weather Analyst Philip Duncan.
“Sometimes we can get a period of patchy rain or showers for an hour two which can take a painfully long time to clear (in cricket circles) due to the longer, cooler, nights – but usually once the sun gets up mid to late morning it burns through it and breaks the skies up into mostly dry areas.”

Over the whole North Island a ridge sits above us, leading to a (mostly) sunny day, while a front starts to disappate to our west, and northwesterlies look like building over the South Island.
Down south, it’s looking nice and clear in the east of the Island, while cloud and possible showers build in the west.

Thick cloud out West tonight not one sun ray broke through. Humid, which is surprising as the NW breeze blows well.

Hopefully it will be fine for the Cricket tomorrow!