Plans ‘turn harbour into a river’ 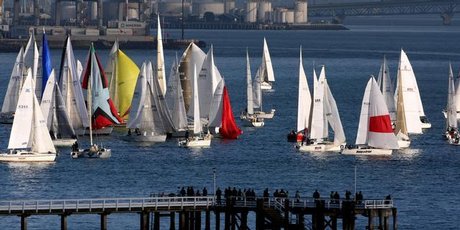 Boaties says the Waitemata Harbour will become the Waitemata River under bold plans to extend Auckland’s port 250m into the harbour.

As tens of thousands of boaties prepare to celebrate Auckland’s maritime history at Monday’s Anniversary Day Regatta the future of the harbour is on their minds.
Penny Whiting, who has been running a yachting school on the inner harbour for 45 years, yesterday said there had been a significant difference to the flow of the harbour as the port had grown.
If it grew any more, she said, the harbour would become the Waitemata River.
Another yachting identity, Graham Dalton, said being at the end of the Fergusson Wharf since it had been extended was like the Waikato River in flood.
Extending the port and narrowing the harbour entrance could really impinge on yacht racing and make the current a lot worse, he said.
The yachtie said the solution was to limit expansion of the Auckland port, increase the size of the Port of Tauranga and invest heavily in the deep-water Northport at Whangarei, including a rail link to Auckland.
Mr Dalton, who imports goods from China, said he could receive goods at his Auckland business as fast, if not faster, from Tauranga.
Ports of Auckland is asking Auckland councillors to “lock in place” a coastal zone allowing it to expand its waterfront operations from 77ha to 95ha by 2055.
If councillors include the zone in the Auckland Plan – a 30-year blueprint for the Super City – any expansion will have to go through a resource consent process where environmental and other impacts will be evaluated.
Ports infrastructure general manager Ben Chrystall said there inevitably would be environmental impacts from extending the port into the harbour, but until detailed studies were done the extent of the impacts was unknown.
Yachting New Zealand chief executive David Abercrombie, whose body has 20,000 Auckland members, said extending the port would have a significant effect by narrowing the harbour entrance with the potential dangers of increased shipping traffic, and change the tide and current.
“It will affect our racing community and could possibly change start and finish lines and the way racing boats use the inner harbour,” he said.
The Westhaven Marina Users Association was totally opposed to the port plans, said deputy chairman Barry Holton.
He was shocked that details of the plans with “such a grave effect on the harbour” were missing from draft waterfront and city centre masterplans that are part of the Auckland Plan.
“The plans will significantly narrow the entrance to the harbour and will affect tidal flows and wind patterns,” Mr Holton said.
William Goodfellow, who runs the Pride of Auckland cruise business, said the plans needed a rethink.
Story from By Bernard Orsman/NZHerald.co.nz
Photo/ Dean Purcell, NZHerald.co.nz