Home > News > No damage reports yet but very windy...

No damage reports yet but very windy 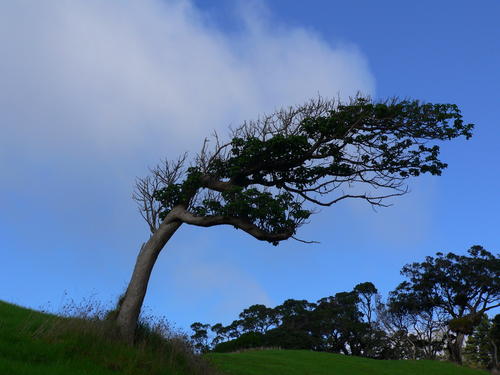 Auckland and Waikato are especially windy with gusts in Auckland over 70km/h at times.  WeatherWatch.co.nz estimates some gusts in exposed areas – and in the CBD where a wind tunnel effect occurs due to the high rise buildings – will be in excess of 100km/h at times today and tomorrow.

Despite the winds blowing small branches down and rubbish bins across roads no serious reports of damage have yet come in.

The wind is making driving hazardous at times around Auckland and other exposed regions of northern New Zealand.

The Auckland Harbour Bridge is especially exposed to the westerlies, making driving difficult for vans, high sided vehicles and motorbikes.  Gusts are estimated to be over 100km/h at times during squally showers says WeatherWatch.co.nz – and those gusts could be even higher in isolated pockets.

“Very hairy ride to work on the scooter. 15kms feels like a looong drive when you are being blown sideways!” wrote Pip Reisch on our interactive Facebook page this afternoon.

WeatherWatch.co.nz says squally conditions are predicted for the next 24 hours across the upper and western sides of the North Island.

“Some very active showers will move in tonight which could, locally, produce damaging gales” says head weather analyst Philip Duncan.  “We also still have the right ingredients for an isolated small scale tornadoes, like we had in Auckland on Sunday, across coastal parts of the North Island north of Taranaki and Bay of Plenty up until noon Tuesday”.

A few thunderstorms are also possible overnight, especially in Northland.

Mr Duncan says the strong westerlies will remain in place across Auckland and northern New Zealand until Wednesday with brisk west to south west winds remaining in place until the end of the week at least.

Seemed unusually strong to me..  72.4 kmph gust here in Torbay, fastest I’ve recorded on my weather station in 2 years..