More travel chaos in Auckland as fog hangs around (+PICS) 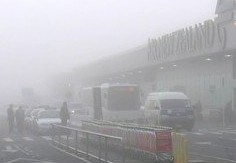 Nearly 30 domestic flights have been cancelled, and 18 are delayed.

Four flights to and from Christchurch have been delayed because of the conditions.

The fog has not affected flights to Wellington, Dunedin and Queenstown.
International flights are also unaffected.

Fog at @AKL_Airport â€“ delays and cancellations expected. For the latest flight information: https://t.co/YcGiDWwS7n or use our iPhone app.

The Government forecaster said fog would cover a wide swathe of the island from Auckland to Manawatu.

Although the fog should lift once the sun rose, some areas of the Waikato and King Country would remain foggy and enjoy only a few hours daylight.

Elsewhere in the North Island, wispy high cloud would start to form ahead of tomorrow’s approaching wet weather.

A number of severe watches have been issued ahead of a monster low that spans the Tasman. Intense downpours are expected to drench Northland tomorrow morning before spreading south later in the day.

The South Island is in for a fine day except for the southernmost regions, which would have rain and showers.