Large low brings rain and wind to wrap up the weekend 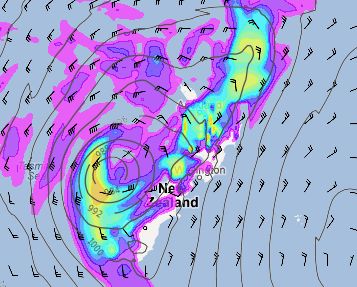 A large and potent area of low pressure will bring rain and wind to much of the country over the next few days starting tomorrow.

Bands of rain from this low will start to be felt tomorrow morning about Northland.  Even though light rain may continue tonight, the bands of more significant rain that come from this system should be felt by mid-morning tomorrow.

Some light showers are possible about Auckland, the Coromandel Peninsula, the Bay of Plenty and eastern Waikato during the morning.  However, the best chance for rain here will probably hold off until the afternoon.  The rest of the island may have to wait until sunset or later before seeing any rain.

Periods of heavy rain are also possible tomorrow and early Monday.  Whilst rainfall amounts aren’t expected to be quite as high as last week’s event, even brief heavy rain on top of the already saturated ground could lead to surface flooding.  The areas most at risk for heavy rain tomorrow are Northland, Auckland, Coromandel Peninsula, Bay of Plenty and eastern Waikato.  Government forecaster MetService also feels that these areas have the potential for seeing heavy rain tomorrow and have issued a watch.

In addition to the threat for heavy rain, there is a possibility for severe northeast gales in the exposed parts of Northland and Auckland on Sunday.  MetService has issued a severe weather watch for this possibility as well.

MetService has also issued a watch for Nelson, Fiordland and Southland.  Periods of heavy rain are possible for these areas late on Sunday into Monday.

As far as general rainfall goes for the South Island; Nelson and Southland could see rain during the morning hours.  During the afternoon, all but the far eastern parts of the island will run the risk of seeing rain.  It won’t be until after dark before places like Christchurch and Dunedin can expect to see rain.