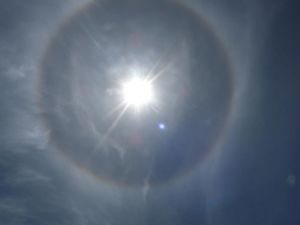 A ring around the sun or moon makes for some gorgeous pictures.  But it can often leave some people wondering why it happens.  What causes it?  Does it mean a storm is coming?

The phenomenon is caused by ice crystals within cirrus clouds, which are the clouds that occur at the highest levels.  They appear as thin, wispy streaks in the sky.

The ice crystals bounce the light from sun or moon around and create a “ring”.

Cirrus clouds are often the precursor to a shot of warm air or an incoming storm system.  So there are many who believe that a ring around the sun or moon means a storm is on the way.

That is often the case.  However, cirrus clouds don’t have to be associated with an incoming storm system or warm front.  When that happens, a ring around the sun or moon is nothing more than a cool photo opportunity.

By the way, there are a few chances for drizzle in Christchurch starting this evening and lasting through tomorrow.

Also, a reminder; Never, ever look directly at the sun.  You are likely to damage your eyes.