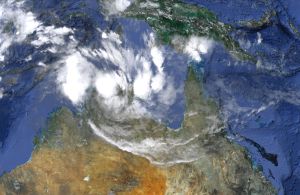 Australia’s Top End is being battered by Grant today. Gusts of up to 140km/h and torrential rainfall are striking the northern coast.  The Australian Bureau of Meteorology says that even though the storm is expected to cross the coast at least 80km east of Darwin, resdients there may see gale force winds.

Grant is then expected to lash the northern tip of Queensland before moving out over the open waters of the Coral Sea later in the week.

From there, the storm is expected to weaken and head south toward New Zealand. But, it looks like it could take a real beating before it gets here.  First, if we do see anything, it wouldn’t be until the middle of next week.  Second, besides the usual weakening that takes place as a tropical cyclone moves south and changes to a mid-latitude “low” or “depression”, it may get some of the wind taken out of it’s sails.

Another, stronger low, is expected to develop south of New Zealand and then move off to our east early next week. That’s about the same time as the remnants of Grant is expectred to arrive here. If that happens, indications are that this bigger brother of a low will steal a lot of Grant’s moisture and energy.

Not only that, but a massive ridge of high pressure is expected to develop and slide in from the west. Another tick against see much of the former Grant.

So, we probably won’t see much of Grant here in New Zealand if these scenarios hold. But, that’s over a week away. We’ll keep an eye on it and keep you up to date.