Flooding risk for Napier and Hawkes Bay this evening 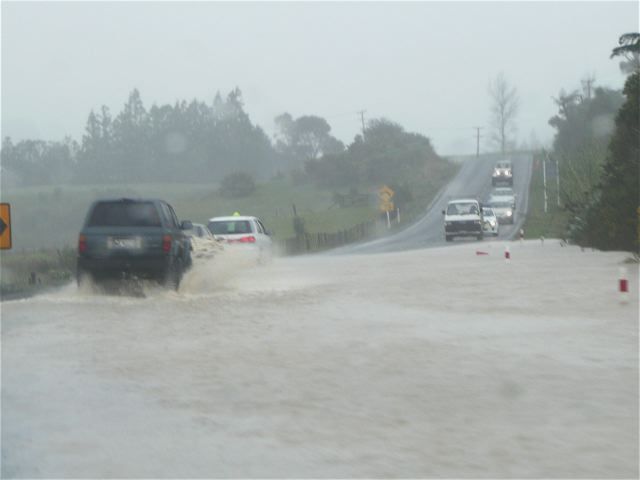 WeatherWatch.co.nz is monitoring heavy rain across Hawkes Bay this evening, as the threat of flooding continues to increase.

A narrow band of heavy rain extends westwards from the Napier-Hastings area and is moving slowly northwards.

MetService says rainfall of 50 to 70mm is possible in six hours or less between 4pm and 10pm Saturday before this system is expected to weaken.

They say rainfall rates of around 30mm per hour are possible.

WeatherWatch.co.nz reader Alan Frame says it has been raining heavily this afternoon. “40mm now in the guage. Serious flooding in Napier. Roads inundated”.

WeatherWatch.co.nz says the heavy rain has really set in across the area and will pose a significant flooding risk to the region.

Rain has been falling steadily all evening. Guage now reads 90mm at 7.30pm. Taradale road has a road block as water is about30 – 40cm across the road. rain at the moment has stopped to intermitent heavy showers.

58mm in the gauge here since 9am today, the majority of this has been since about 3pm. Quite abit of surface flooding also. Rain doesnt seem to be falling as heavy out in Havelock as what it is here on the west side of Hastings.

Just been speaking to relations in Te Awa – about 3km south of Bluff Hill, Napier – they report steady rain all day, interspersed with heavy downpours from time to time – about 3 inches of water lying on section and stream of water flowing between neighbour’s property; also some people unable to leave house because of surface flooding – less for tea, apparently!

p.s interesting to note the stream of cloud extending from the Chathams and advancing towards New Brighton, and a portion heading towards Napier!!??