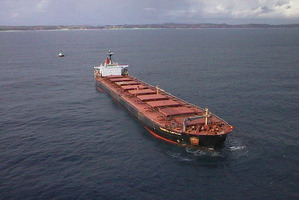 Marine officers are aghast a 294-metre iron-sands export ship will be allowed to berth close to the rugged Waikato west coast tomorrow – without a licensed pilot on board.

New Zealand Steel yesterday received a last-minute exemption from Maritime NZ, after failing so far to recruit and train a licensed replacement for a pilot who has retired after 30 years in the job off Taharoa, south of Kawhia.

Although agency director Keith Manch is requiring two pilots to be on the bridge of the Taharoa Destiny, their normal job is guiding far smaller vessels to Taranaki oil installations well off the coast, and they are not licensed to berth the ironsands ship.

He said at least three practice runs of mooring the ship to an inflatable “dummy” buoy must be completed to the satisfaction of its master and the Taharoa harbour-master before the vessel can be berthed at a permanent off-shore steel installation weighing about 200 tonnes.

The harbour-master, a master mariner employed by Maritime NZ, would also have a senior technical advisor with international tanker experience on hand.

More than 1.2 million tonnes a year of iron-sand is loaded as slurry through a marine pipeline to the ship, for export to a growing steel-making market in China.

Mr Manch has also reduced the maximum wind speed and wave height for berthing the vessel, which when fully laden has a dead-weight of about 176,000 tonnes, unless its master and harbour-master agree otherwise on the day.

A tug, not normally part of the operation under a licensed pilot, must be on stand-by to provide assistance in what he calls “the highly-unlikely event of an emergency situation occurring.”

But Maritime Pilots’ Association president Neil Armitage said the tug, while strong enough to hold the Taharoa Destiny from running aground, had limited manoeuvrability if trouble arose.

He said the ironsands ship was required by the prevailing southwesterly wind to go around the steel buoy and close in on it from the northeast.

Although the buoy is 3.5 kilometres off the coast, much of that distance is too shallow for the ship’s keel.

Captain Armitage said the manoeuvre required “fine tolerances” to prevent it from grounding as the vessel’s main mooring rope was secured to the buoy.

That almost happened to an older iron-sands vessel, the Taharoa Express, after its engines cut out in 2004 and its keel was left with just two metres of clearance in the Taharoa surf.

He also recalled the deaths of four Taiwanese seaman after a cable snapped at the site in 1978, sending a lethal length of rope whipping across the bow of their ship.

“It seems to be an 11th-hour desperate attempt to satisfy the commercial requirements of the operator [NZ Steel] and breaking one of their [Maritime NZ’s] own rules to do that,” he told the Herald.

“Their approach seems to be to throw more people at it – but that doesn’t make up for having one licensed capable pilot.”

He said high risks surrounding the Taharoa operation were likely to increase under a plan to add two more vessels to the ironsands run.

Captain Armitage said he was concerned not just about the Taharoa operation, but the precedent Mr Manch was setting for pilots elsewhere around the New Zealand coast, of which his organisation considered itself a guardian.

“It’s lowering the standards quite significantly – they say safety is a priority then they do this, to expedite commercial interests.”

A NZ Steel spokeswoman said the company had employed two leading companies, each with a number of very experienced professional pilots “with specific experience in mooring operations similar to Taharoa Port.”

As well as having had two days of training on a ship’s bridge simulator, the pilots assigned for tomorrow’s operation had completed a number of observational voyages on the Taharoa Destiny, and “a comprehensive desktop training exercise.”