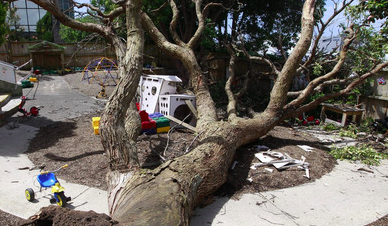 The owner of a daycare centre where four children were injured when a tree toppled onto a playground says he regrets not seeking professional advice after noticing the tree had not produced leaves in three years.

Four toddlers were taken to Starship Hospital after the tree at Discoveries Educare, in the Auckland suburb of Newmarket, fell during blustery weather Tuesday afternoon. [winds were gusting over gale force at times].

Discoveries Educare owner Ajit Singh told the Herald tonight a boy and girl aged 3 – initially listed as critical and serious – were in a stable condition and expected to be discharged Wednesday. Two other toddlers had already been sent home.

Singh confirmed there had been concerns over the tree since the daycare opened following renovations of a large villa three years ago.

They opened in autumn, but noticed the following spring the tree was not producing leaves.

He asked a “handyman” who had done work for the daycare to look at the tree.

The handyman told them the tree was not diseased.

Singh also raised concerns about the tree with the agent that managed the leased property on behalf of the landlord.

“I told him they needed to look at the tree.”

He did not receive a response, Singh said.

Neither his landlord nor the agent could not be contacted Tuesday night.

“We should have done that.”

However, he said he was never concerned the tree would fall over. He was only concerned it did not produce leaves.

“[It was] never in our dreams that such a thing would fall.”

The daycare will be closed Wednesday, on Ministry of Education advice.

But he planned to get other trees at the site checked by a professional, Singh said.

“I will make sure that happens.”