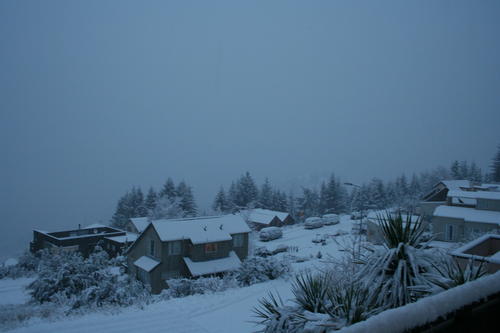 Herald on Sunday — There’s nothing like a snowstorm to make most of us happy – and this one was perfect. It arrived in the middle of the school holidays, so kids could enjoy it.

It arrived when many parents were on leave. It dumped enough snow to build snowmen. It brought snowflakes into towns that rarely see snow – Wellington, Nelson, Greymouth, Palmerston North, Hawera, Stratford, Hokitika, Greytown, Masterton and Taupo.

And, best of all, it was short-lived. Within 36 hours of the storm clearing Canterbury, a warmer nor’wester had already arrived.

The snow also arrived before lambing season really got under way.

Christchurch survived remarkably well. The weight of snow can crush buildings (think Stadium Southland last year) yet there were no reports of structural problems in the thousands of earthquake-damaged buildings.

The possibility of snow in Auckland was exciting for many people as snow clouds (which have a significant bronze tinge with wispy edges) scudded across the city, and hail and even isolated sleet fell in some suburbs.

But it wasn’t meant to be and snow never fell in the city itself – it had been about 35 years since snowflakes last fell in Auckland, and it had been 40 years the time before that.

There were some reports of light snow on the tops of the Waitakeres – that’s impressive in my books.

Some Aucklanders took to their cars to find snow within the city limits. “Just drove Scenic Drive from Waitakere end to Forest Hill Rd and sleet on and off most of the way,” wrote Trazie Dunstan on the WeatherWatch Facebook page.

Meanwhile, WeatherWatch.co.nz announced last week that we are finally launching national forecasts to 18 main centres. The feedback has been overwhelmingly positive and we hope to work with all you weather enthusiasts to ensure our forecasts are bang on. We aim to launch it some time in spring.