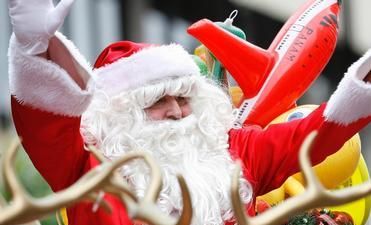 The Farmers’ Santa Parade – Auckland’s biggest public event of the year – gets underway at 2pm today and the weather couldn’t be better – but it’s going to be hot.

WeatherWatch.co.nz estimates the temperature in the shade may be around 28 degrees in the CBD this afternoon depending on how early the cloud burns off this morning.

WeatherWatch.co.nz predicts the high for Auckland today will be 25 degrees but that temperature is expected at the airport where open grass and sea breezes help keep the temperatures down.

In the city centre lack of wind, concrete buildings and tar seal roads will cause the mercury to rise.

And spare a thought for poor old Santa.   Wearing a woolly jacket in the open sun will be a fairly sweaty job for him.

The burn time will also be extreme under clear skies.

According to the New Zealand Herald a staggering 250,000 people are expected at the event.

Take a look at the huge logistics involved in this event – The New Zealand Herald’s Bronwyn Sell goes behind the scenes of the biggest public event on Auckland’s calendar, the Farmers’ Santa Parade.