An early spring arrives – but beware a lurking winter. We explain NZ’s unique set up 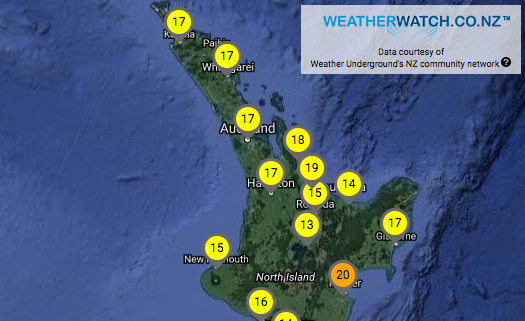 A west to north west wind continues to blow over the North Island with temperatures likely to again climb over the 20 degree mark as more evidence stacks up that we’re in an early spring weatherwise.

And in true spring style the temperatures are showing signs of bouncing up and down a bit as winds transition from mild nor’west to cooler sou’wester every few days.

“Spring weather patterns are like mixing a bath full of water. Winter is mostly the cold tap running but in early spring someone turns on the hot water and we get occasional moments with a warm current as it’s all mixed up” says head forecaster Philip Duncan. “The later we go through spring the more ‘warm water’ we add to the mix”. Spring fades out in November and December as summer conditions usually arrive by then.

Hawke’s Bay is likely to reach over 20 degrees both Saturday and Sunday – but a cooler southerly in the South Island means highs will only be in single digits for some on Sunday with frosts returning on Monday and Tuesday in some southern areas. Napier’s highs drop down to 15 or 16 early next week which is still fairly mild.

We’re now at the point of year where several days of ‘brutally cold weather’ in a row is less likely than just a couple of weeks back, but with spring weather conditions only just starting (and a long spring season still ahead) we remain at a high risk for sudden snow storms/cold snaps and frosts and these all become far more of a concern for many orchards and vineyards in the month of September as buds begin to bloom.

The colder southerly coming into Southand and Otago on Sunday and into Monday will be locked in as high pressure arrives on Monday. Overnight lows down to -5C are possible for one night then the week ahead is looking more wintry temperature-wise for southern areas (like Central Otago) with lows near the freezing mark. But spring-like conditions remain in the north (for example Waiouru in the Central Plateau near Mt Ruapehu may not drop below freezing this week with double digit highs as the southerly fails to climb that far north).

You’ll find the coldest weather will linger longest in Southland and Otago in late winter/early spring, with peak cold air now around Antarctica and the Southern Ocean. However the “spring-like” westerlies are currently stopping these southerlies from roaring northwards and causing nationwide wintry weather. It’s becoming increasingly isolated to the lower South Island.

On a side note it was this coming week back in 2011 that saw a major snow event produce heavy snow in downtown Dunedin, Christchurch and Wellington and isolated snow flurries even into Auckland City. That took a particularly huge high pressure system (anticyclone) over Tasmania, Australia, stretching north to south to create that historic event – coupled with a low south east of Dunedin.  The two air pressure systems worked together to dredge up a historical Antarctic blast for New Zealand.

At this stage none of the long range data we rely on is suggesting there is any major wintry event coming for all of New Zealand within the next week or so – but – all it takes is for a long (north to south shaped) high pressure system over Tasmania coupled with a low south east of Dunedin and that’s the perfect recipe to dredge up that super cold air that remains lurking around Antarctica and the Southern Ocean and is only peaking now at its coldest. We may have signs of an early spring, but wintry weather remains right on our southern door step and could impact us without much warning – it’s down to the chaos of the highs and lows.

Only Otago/Southland? Looks like colder air and highs of 8/9 in Canterbury on Monday too.

Yes but generally speaking Canterbury is getting more warmer days than those further south.