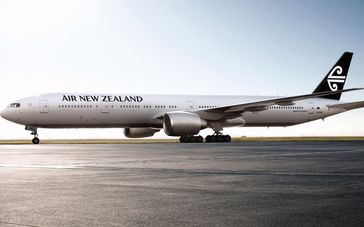 Air New Zealand is ditching its historic teal colouring on its planes and will start painting its aircraft tails black.

The airline is also changing the colour and style of lettering on its aircraft as part of a livery overhaul that will start on its fleet next year.

“Black has resonated well with our customers and staff who identify with it as the colour of New Zealand and a natural choice for our national airline.

“It inspires pride, is part of our Kiwi identity and a symbol of Kiwi success on the world stage,” Mr Fyfe said.

Corporate branding was changing to the new look and this should be finished by the end of the year.

New planes for delivery would now be painted in the new colour scheme, apart from one regional aircraft due to arrive in October which would be painted all black.

Including its regional fleet, the airline has more than 100 aircraft and they will be repainted when scheduling allowed.

The cost of the image change was not disclosed.

Air New Zealand’s forerunner airline, Tasman Empire Airways Ltd (TEAL), started in 1940 and teal shades have been used in the airline since.

The response to the new livery from followers on the airline’s “the flying social network” site have been mixed.

Some praised it as “swish” and “nice” but others said it was “bland” and “horrible”.

I have nothing against black as long as the airplanes are perfectly functional. I am not sure though why this color when bright color airplanes are so nice, I learned few things about that at an aircraft restoration event.

Black this and black that! Everything is black these days when refering to anything or anyone connected with NZ! Why this madness to such a gloomy Non-colour! I liked the Teal of TEAL and the Red of NAC. Why not combine the two! Bugger black!