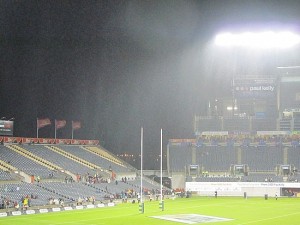 It’s no surprise that the weather has affected numerous rugby matches as often it’s played in the depths of winter.
Here are 5 stand out matches that come to mind internationally.

These days rugby at the top level tends to be played on manicured pitches that wouldnâ€™t be out of place at Lords or Augusta. Internationals are played indoors at Cardiff and in Melbourne and even now in Dunedin. There are regular cries for the Six Nations tournament to be moved from its mid-winter slot to a time when the weather is more likely to be conducive to free-flowing rugby.

Rugby league has even moved to the summer. Rugby, however, is a winter sport, designed to be played in the most inclement of conditions. Bad weather rugby can be great rugby and lest we forget this, here are some matches played in the worst weather imaginable.

The All Blacks’ visit to West Wales coincided with wind and rain of Biblical proportions. The capacity at Stradey Park had been increased through the erection of a temporary stand on the adjoining cricket pitch, but the club were told, by the Fire Brigade, that they were not allowed to use it as it was in danger of blowing away.

The wind that day was so extreme that Colin Stephens, the Llanelli outside half, took a drop out in the first half and it went back over his head. A similar exercise in the 2nd half hit the crossbar at the other end on the first bounce.

Llanelli played into the wind first half and almost scored with Simon Davies dropping the ball with the line at his mercy. When the whistle went for half time with the All Blacks only leading 8-0, Phil Davies jumped up and punched the air in delight. Enter Buck Shelford, who strangled the life out of the game with one of the most awesome forward displays ever seen. The All Blacks won 11-0.

The most dramatic of World Cups was coming to its climax against the backdrop of Nelson Mandelaâ€™s rainbow nation. The first semi final between France and the Springboks was held in Durban, dubbed by the local tourist board as the place where â€˜the fun never setsâ€™.

When the game was eventually played, South Africa won the arm wrestle with France despite Les Bleus being unlucky to have a try disallowed. While the worldâ€™s press headed for the following dayâ€™s semi final in Cape Town on flights that the authorities had thoughtfully delayed until after the match was over, Francois Piennarâ€™s men marched off to Ellis Park and their date with destiny in front of President Mandela clad in his Springbok number 7 shirt.Will they never learn? The monsoon at kick off delayed the game by a couple of hours and spoilt the carefully planned publicity campaign of an integrated South Africa as a small army of African women were sent onto the pitch to squeegee it dry.

Back in the days when national teams did proper tours instead of flying into capital cities for one game, Wales went to Australia with echoes of the 1991 debacle still fresh in everyoneâ€™s minds.

One of the warm up games was against New South Wales Country in a little farming town about 400 miles North of Sydney. The locals had really embraced the event with banners over the main street welcoming the teams and supporters, pre-match dinners, post-match dinners, a local girl’s school choir had learnt the Welsh National anthem to sing before the game. It hadnâ€™t rained in Moree for five years. What could possibly go wrong?

The drought broke the day of the game and the rain made up for lost time. The downpour was torrential, the schoolgirls, dressed in Welsh costume, did manage to sing their anthem, although by the time theyâ€™d finished, they looked like drowned rats. The spectators didnâ€™t fare much better, the few Welsh supporters had been given seats on the half way line, but the stand was temporary and had no cover. Some were luckier and managed to wangle their way into sponsor’s tents, which offered more shelter but by the end of the game the place was like a swamp.

Wales, more used to the conditions than the local team, even managed to win, their only victory on the tour.

The First Test between the All Blacks and the Lions in 2005 was one of the most keenly anticipated games in rugby history. It was the first time theyâ€™d met in 12 years. New Zealand, perpetually the best team in the world outside Rugby World Cups had won the Tri Nations at a canter. Sir Clive Woodward had picked a squad containing the nucleus of his 2003 World Cup winning side and the preparation had been meticulous, the management team even including Alistair Campbell, Tony Blairâ€™s infamous spin doctor to manage public relations.

These days, the Happy Valley stadium in Hong Kong is a 40,000 capacity ground capable of hosting Bledisloe Cup games. In 1992, the tournament and the stadium were a little less formal, with quite a few temporary and roofless stands. The 1992 tournament saw UK representation from the Barbarians, but when they saw the conditions on the last day, they promptly contrived to lose to North Korea in one of the tournament’s biggest shocks.

The storm which hit the tournament was one of those flash tropical ones, where it absolutely hammers down for an hour and then stops. Unfortunately, this one forgot to stop for about 9 hours.

And who can forget the 2006 Super 14 Final at Jade Stadium – the game that everybody watched but nobody saw, due to the fog.

I remember a game at North Harbour Stadium about 10 years back where the fog was so thick the players couldn’t see from one end of the field to the other. The TV coverage was quite amusing.

I’d have to say the worst weather I’ve ever been in at a rugby test was when Scotland met the All Blacks at Eden Park in 1975. I was still at school at the time and we were in temporary seating behind the posts at one end. I can clearly remember it rained solidly for 2 days before the game and we were in our seats with water up to our knees! The referee blew up every ruck as they were scared of players drowning because of the surface water.

And good old BeeGee scored one of the great wet weather tries in the second half.