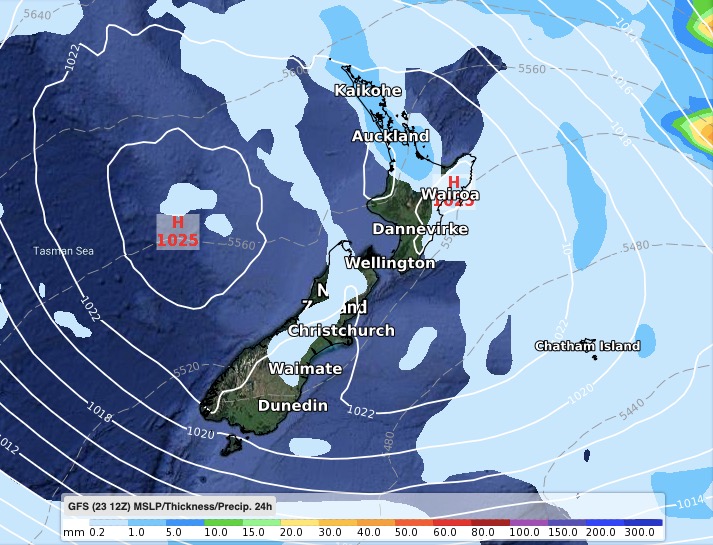 A big high pressure system is parked over NZ today and with it comes drizzle, downpours and dry – welcome to a La Nina summer. La Nina weather conditions mean more morning and nighttime drizzle patches and an increased chance of big but isolated downpours in the afternoon, thanks to higher levels of humidity and warmth in the atmosphere.

La Nina, which has been on the cards for several months and was officially declared yesterday by BoM scientists, means sea surface temperatures around NZ, and north of NZ, are warmer than average. A warmer than average sea = increased chances of cloud, humidity and downpours.

Today is a great example of our headline. High pressure is covering much of New Zealand right now and for those in places like Auckland and Waikato we saw isolated heavy afternoon downpours yesterday and then as it eased we saw more widespread areas of drizzle last night. For many the drizzle barely registered in the rain gauge while others had a top up from the isolated downpours.

“In La Nina summers we can have drizzle in the morning in northern and eastern parts of both islands then in the afternoon the daytime heating rounds up all that moisture into one, or a few, big tall afternoon downpours, which can also turn to severe thunderstorms” says WeatherWatch.co.nz head forecaster Philip Duncan.

“In large dry areas over summer this can give what we call the ‘Swiss cheese effect’ where a dry region has “holes” in it from where the afternoon downpours developed and then drifted.

WeatherWatch.co.nz says some forecasts will be talking of showers or late rain over the weeks ahead and people should pay very close attention to: A) The daily rainfall total, as if it’s below 5mm you may understand it’s some afternoon isolated downpours (and they can also miss you, despite being forecast). B) The hourly rainfall forecasts to make more sense of it all.

In fact, the hourly forecasts we have (powered by IBM) help bring the main forecast to life. If you’re someone that really needs to monitor rainfall risks we strongly suggest you also try www.RuralWeather.co.nz as well – it has the most weather data for your hyper-local part of NZ than any other forecaster on earth.