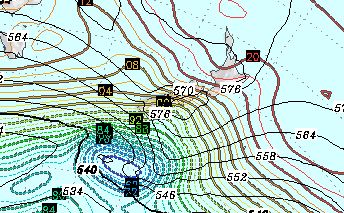 The departure of ex-tropical cyclone Wilma has coincided with a big shift in our weather pattern say WeatherWatch.co.nz forecasters.

The change is likely to be a positive one for those in the upper North Island who have faced four tropical lows in just three weeks.

Head weather analyst Philip Duncan says the shift will see a low chance of sub-tropical systems affecting New Zealand into the first week of February.  “The long range weather maps and data show a big increase in air pressure across the upper North Island and north of New Zealand.  High air pressure will act as a brick wall, blocking the next set of tropical activity from reaching New Zealand”.

Mr Duncan says instead it will send the next tropical storm in to the Queensland coast.

On Thursday WeatherWatch.co.nz was the first news organisation in Australasia to predict and cover the impending cyclone which Queensland authorities say could be worse than the recent flooding across Brisbane and other parts of Queensland.

Australian authorities warn the future cyclone may be a Category 4 storm, however WeatherWatch.co.nz believes it has the potential to grow into a Category 5 cyclone, based on modelling from the past week, current sea surface temperatures in the Coral Sea and the developing weather pattern over New Zealand which will help guide the storm directly into Queensland.

WeatherWatch.co.nz will provide extensive coverage of this incoming tropical cyclone for Queensland.

Firstly the high air pressure in the north will stop the tropical and sub-tropical rain makers from moving into northern New Zealand.

Secondly the westerly flow across the country will mean more wet spells for the South Island’s West Coast.

Thirdly the weather pattern will be windier and more “spring like” according to WeatherWatch.co.nz.  “Today is a prime example of what we might see more of over the next week or so with strong, gusty winds moving in to eastern and inland parts of the South Island and central New Zealand” says Mr Duncan.

Finally the windier weather should mean hotter conditions in the east of both islands.

Thank you. I believe a lot of Aucklanders are very grateful for the updates you gave on your website.

This meant a lot of people could get safely to higher ground, secure their properties and be prepared for the coming storm.

Thanks again for your excellent work.

Thanks very much Katrina, we appreciate that. 🙂

what Hano said. I thought your coverage of Wilma was amazing, I was glued to WW all Friday and into the wee small hours of Saturday. We took a real hammering up here in Northland, but reading the comments from other people was actually really comforting ~ it made me realise we weren’t alone! I think that it’s great that you take the time to not only report the weather but let us post comments and you even answer them! So thank you, you are stars. xx

We’re really glad we helped make you feel more comforted during the storm.  Our mission is not to sensationalise the weather, it’s to give people early warnings and detailed coverage.

Thanks very much for your support, we really do appreciate it.

I just wanted to say a big thanks to the weather watch team for their coverage and up to date information on weather events. The fact people can interact with your forecasters for warnings and reassurance is fantastic and much needed in NZ where other weather authorities lack in the simple, plain explanations for those of us who lack understanding of weather patterns. I have recommended you guys to so many people since you started this site and they all head straight for here when a weather event is taking place. Not much faith is put into the met service and their updates are simply too far apart. So a huge thank you to your team. I can see great things happening for you guys and this site in the future 🙂

Great to hear you’ve recommended out site to others.  We are investing more into the site and hope to upgrade our services even further in the coming months.  Thank you for your support!

Good reading WW, nice to know we can have time to get over last few lows & cyclone and clean up. You certainly outshine other weather services and are the only place to go for good relevant info.
In reading all your information, news and comments and the replies to some of them I do wonder why you do not put out a daily forecast for more places than just Auckland. In one recent reply to a comment you explained to a person in Napier why it was not the coming cyclone causing the winds but a system south of them, so I thought why not do a country wide forecast.
I think I remember back a year ago that you did say it was on the cars to do this.

Finally a question, during the cyclone here in Whangarei we had the extremely heavy rain but our part of town did not get any of the high cyclonic winds, just a few brief puffs. We reside in the Woodhill part of town out Maunu way. It felt strange that just a few km’s away it was nasty. We just had heavy rain from early afternoon until around 2am.

Really great to have your support.  With regards to the winds, Wilma only JUST hit Northland with the winds… so many nearby areas had winds, some just down the road did not.  Just a small area of gales as she passed by – if she had been even 50kms closer to NZ wind damage would have been severe.

Hopefully it will change after this week coming,we get far to many southwest winds here in Auckland.