Westerlies westerlies, the week ahead 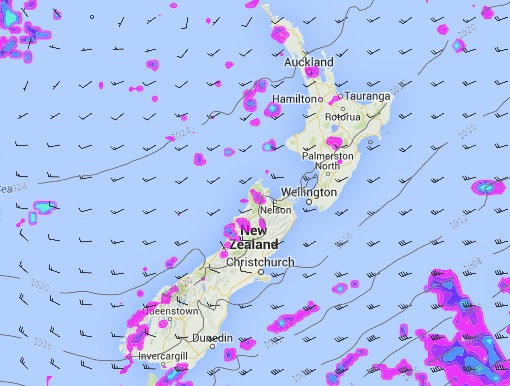 This coming week is looking very similar Monday through to Thursday then things finally change up on Friday, so instead of some long winded write up below (pun not intended) we can hopefully keep details fairly short.

So basically this Monday through to Thursday we have a westerly quarter airflow over New Zealand, winds from the northwest may be strong at times about inland Otago , Canterbury, Marlborough and around the Cook Strait area on Monday, Tuesday and Thursday.

Weather for the West Coast of the South Island will be dominated by mainly cloudy skies and showers, showers a little less frequent for the west of the North Island with sunny areas frequently making an appearance. Eastern parts of the country are in for mainly sunny weather and warmer temperatures. Showers will frequently affect Southland and possibly southern parts of Otago as fronts move through those regions from time to time. On Wednesday conditions ease for all western regions somewhat with sunny weather remaining out east.

Finally on Friday we have a sizable system moving over New Zealand with rain and potential heavy falls moving off the West Coast of the South Island and into the west of the North Island, showers and cold southwesterlies spread up the east coat of the South Island but ahead of that expect a strong northwesterly airflow Canterbury northwards through to Gisborne.