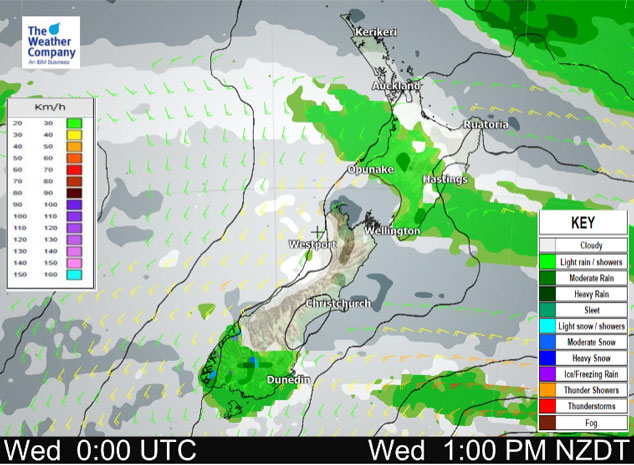 A series of cold fronts move northwards over the country today bringing showers to most regions for a time.

Northland, Auckland, Waikato & Bay Of Plenty
Mostly cloudy, a few late afternoon / evening showers as westerlies change southwest. Northland and eastern Bay Of Plenty has sun and some high cloud plus warmer afternoon temperatures than elsewhere before showers move in during the evening.
Highs: 18-20

Western North Island (including Central North Island)
Showers develop in the morning, easing afternoon with a westerly change and clearing evening as winds swing further to the southeast.
Highs: 13-16

Eastern North Island
Showers move through Wairarapa in the morning then further north from afternoon with freshening southerly winds, warm with some sun before showers move northwards. Rain sets in during the evening for a time, easing overnight.
Highs: 15-22

Wellington
Morning showers clear, a chance of a shower at times for the rest of the day otherwise mainly dry. Mostly cloudy weather. Light winds tend south to southeast in the afternoon.
High: 14

Marlborough & Nelson
A mostly cloudy day for Marlborough, expect the odd shower or drizzle patch with light winds tending to the south around midday. Nelson has early cloud break to mostly sunny weather, cloud thickens again later in the evening with the chance of a shower.
Highs: 14-19

West Coast
Cloudy areas and occasional sun for most, risk of a shower otherwise mainly dry. Southwesterly winds. Fiordland has some morning rain, clearing in the afternoon and sun increasing as westerlies change south to southeast.
Highs: 13-15