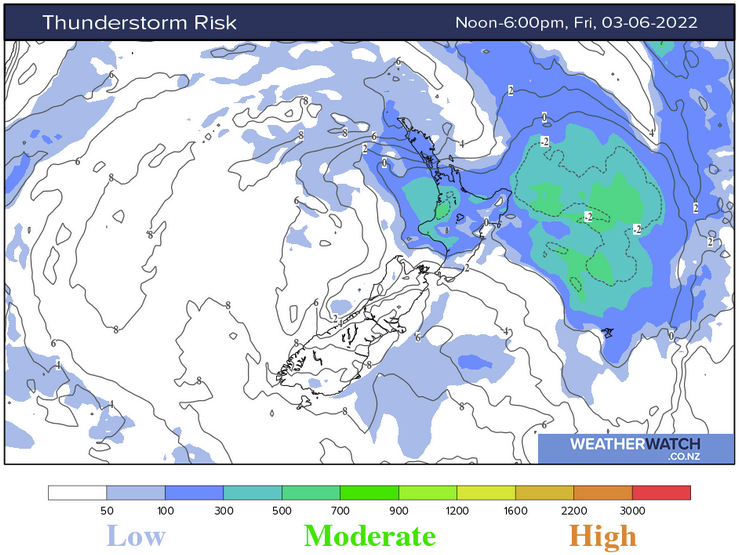 A change in direction today as southwesterlies spread northwards over the country, naturally this will bring a drop in temperatures. Showers may be beefy for the western North Island, perhaps even a few rumbles then easing this evening.

WEEKEND STARTS OFF SETTLED AND FROSTY

High pressure moves in over the country tomorrow bringing settled frosty weather, there is still a few clearing showers for the North Island though. Coromandel then Auckland later in the day sees showers thanks to a trough.

The majority of next week looks fairly unsettled with a westerly quarter airflow pumping in fronts at times, rain or showers are likely in the west while it is looking drier and a touch warmer in the east. Strong northerly quarter winds ahead of a front moving through on Tuesday.

Thunderstorms will likely occur for western regions when fronts move through, especially on Tuesday, Wednesday and Thursday. The West Coast has a higher chance of storms on average than the western North Island.

This map below shows where it is wetter than average (blue) over the next 7 days and where will be drier (red). Clearly the western side of NZ has some wet weather coming up while it is a bit drier in the east. Although the eastern North Island may get average rainfall especially when heading into Hawkes Bay and Gisborne.