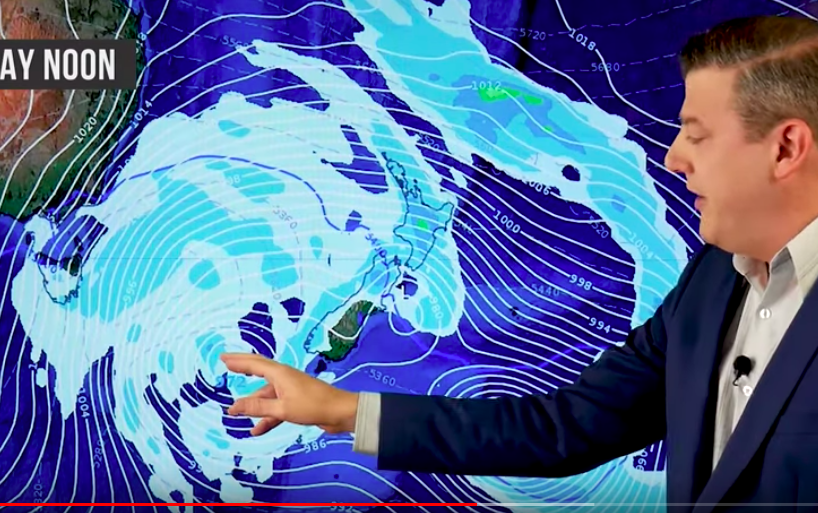 An enormous area of low pressure is forming near New Zealand over the next several days and it will produce heavy rain and strong westerly winds this weekend in some regions (mostly the west) then next week it turns more southerly in the south.

Latest data continues to support a very cold start to the next week in the south, which is problematic due to lambing and calving now underway or starting.

Sea level snow is possible but even if not, low level snow to 100 or 200m looks likely along with sub zero wind chills.

The upper North Island isnâ€™t so impacted by the cold, but may be windy at times with possible gales.

Love the fact that you are challenging NIWA and their reaction to potential weather events. Keep disrupting.

Your doing a fantastic job as always, but I’m disturbed by NIWA taking you to task and they are wrong a lot , and this will just create confusion .

On Stuff saying there :

There’s “no need to be alarmed”, a massive storm is not heading towards New Zealand, NIWA says.
Earlier in the week, the New Zealand Herald reported a “polar blast” of a “giant storm” was expected to hit the country, based on predictions from weatherwatch.co.nz.
But the low air pressure system that sparked concern was currently located a significant distance from New Zealand, Niwa said. “It could be really far south of New Zealand, sparing the country of major impacts,” it said in a tweet.

Government agency NIWA are specialists in climate science – not weather forecasts and their attacks have again come from their aggressively commercial division which has been attacking us in a variety of ways in recent years. The Commerce Commission currently has a complaint from us they are looking into about NIWA due to excessive pricing for public funded data – or blocking us access entirely from tax funded data. The Government’s official weather voice, MetService has this afternoon acknowledged there is definitely severe weather potential and has issued a Severe Weather Outlook saying Heavy Snow and Heavy rain are both possible this weekend (and the low may linger until Wednesday morning). We suggest you ignore NIWA for weather and follow MetService for official warnings and hopefully a private forecaster like WeatherWatch for an independent voice too.

Kind regards and appreciate what you wrote.
Cheers
Philip Duncan