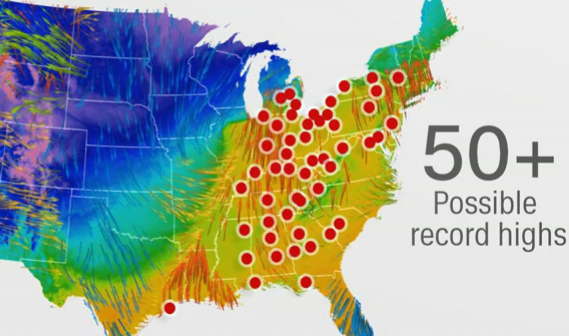 CNN Senior Meteorologist & friend of WeatherWatch.co.nz Brandon Miller writes for CNN.com about the recent weather in the US that has defied the calendar.

It’s 16 degrees (Celsius) at 8 a.m., and it already feels too hot for jeans. The birds are chirping, the flowers are blooming, there is a noticeable layer of pollen on cars — and it’s still February!

This month continues to defy the calendar, with over 4,400 record highs stretching from the northern US border to the south since February 1. In that same timeframe, only 29 record lows have been recorded.
The trees are responding accordingly — to the weather, that is, not the calendar — and are producing leaves as far north as The District of Columbia. According to the USA National Phenology Network, spring is arriving a full three weeks early. Call it Februmarch.
SPRING WEATHER = SPRING STORMS
With spring-like weather comes spring-like storms, and Friday will bring severe weather across the Great Lakes. The Storm Prediction Center has issued an “enhanced risk of severe thunderstorms from Southern Lower Michigan across Eastern Indiana and Western Ohio to North Central Kentucky.”
Severe storms in the Midwest and Ohio Valley normally do not occur until March or April. In fact, the National Weather Service in Detroit has never issued a tornado warning in the month of February.
February would normally feature a snowy landscape and the Great Lakes covered with abundant ice. But not this year. As of Wednesday, 0% of the Midwest had snow cover, and only 7% of the Great Lakes featured ice (normal for the date would be about 40%).
WINTER RETURNS? ONLY BRIEFLY
The heat of “Februmarch” will peak across the eastern half of the country on Friday, as southerly winds ahead of the storm system moving across the Great Lakes pull up warm, moist air from the Gulf of Mexico. According to Ryan Maue, a meteorologist with WeatherBell Analytics, high temperature records will be set Friday from Tallahassee, Florida, all the way up to Flint, Michigan.
A cold front will push across the eastern portion of the country on Saturday and bring the temperatures back to seasonal norms for the rest of the weekend, but spring-like weather will return next week.
High temperatures 15 to 20 degrees (F) above average will return for the final day of the month, reaching 21 degrees (C) as far north as Richmond, Virginia. It will be a fittingly warm end to “Februmarch.”
By Brandon Miller. CNN’s Judson Jones contributed to this report.
– CNN has some cool animations showing the records that may be broken and how spring has arrived early – click/tap here to view.