USA – Thousands of flights cancelled ahead of massive blizzard (+VIDEO) 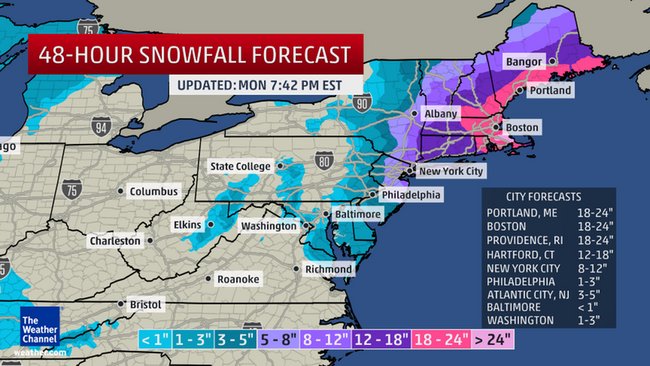 Thousands of flights have been cancelled as millions of Americans brace for a northeastern winter storm that New York’s mayor warned could be one of the biggest blizzards in history.

Snow, which began falling early Monday local time across the region, is expected to accumulate steadily throughout the day before turning into a major storm expected to paralyse parts of New York and New England.

Officials in states along the US east coast have urged residents to stay home as they prepare for winter storm Juno, which could become up to about a metre of snow in some areas.

The National Weather Service has issued blizzard warnings from New Jersey to the Canadian border, including New York and Boston.

More than 5100 flights have been cancelled within, to or from the United States today and tomorrow, according to flightaware.com.

Some airlines have waved change fees as major delays and widespread cancellations were anticipated.

“We are facing most likely one of the largest snow storms in the history of this city,” New York Mayor Bill de Blasio said.

“My message to all New Yorkers is to prepare for something worse than we have seen before.”

“Take every precaution, now is the time to get ready for this extreme weather,” de Blasio said. “Don’t underestimate the storm.”

Meteorologists said the storm would bring crippling blizzard conditions and warned that travelling in the affected areas late Monday and Tuesday would be highly dangerous.

Power outages and falling trees are likely during the storm and in its aftermath, meteorologists warned, saying 28 million people were in the possible blizzard zone.

Coastal flooding is also a risk in the early hours of Tuesday, local time.