USA – Power still out for half a million after storm 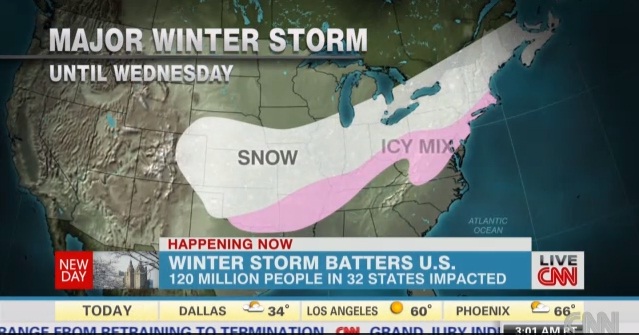 Bob and Debbie Burns endured three dark and powerless days after Hurricane Sandy. When the lights went out this time — the result of a powerful winter storm– they were ready.

Candles give a pleasant glow to their living room in Abington Township, Pennsylvania, a Philadelphia suburb. Burning logs in the fireplace give at least a little warmth.

They have hot water, and a gas stove to cook on — both products of their experience in the wake of Sandy — the 2012 hurricane that caused widespread damage and power outages up and down the Eastern Seaboard.

And they huddle under blankets and pass the time talking.

Winter far from over

The couple are among an estimated 578,000 who remained without power early Thursday in the wake of Wednesday’s snow and ice storm, according to a CNN tally of outage figures provided by electric utilities.

In Philadelphia alone, electric provider PECO said that at the peak of the outages midday Wednesday, more than 623,000 homes and businesses were without power.

That number had fallen to about 431,000 Thursday afternoon, according to the company.

The vast majority should get their power back by Friday, but for some, the wait could stretch to Sunday, spokeswoman Debbie Yemenijian told CNN.

After all, it’s the second-most damaging storm in the company’s history, PECO said.

Crews from Arkansas, Illinois, Massachusetts, New York, Ohio and Canada have joined PECO’s workers to fix the damage, the company said. In all, more than 1,500 workers are in the field, it said.

A similar number have been fielded in the Baltimore area, where some 45,000 homes and businesses remained without power early Thursday, utility Baltimore Gas and Electric Co. said on Twitter.

Tens of thousands also remained without power elsewhere in Pennsylvania and New Jersey, with a handful of outages remaining in Ohio as well.

The storm that caused all the problems moved out of the Midwest on Wednesday, bringing more than 10 inches of snow to Boston, 13 inches to other parts of Massachusetts and 4 inches of snow and a quarter-inch of ice to New York.

The wet, heavy snow was a delight for children who got a snow day, less so for everyone else.

“Harder to push, not as easy actually to plow,” said Boston snowplow driver Nick Sfravara. “It’s definitely a challenge to get this stuff out of the way rather than the light stuff.”

Another system is forecast to bring snow to the region this weekend, but it’s not expected to produce as many problems, according to CNN meteorologists.

The central United States will continue to deal with unusual cold, with wind chill warnings or advisories posted in more than a dozen states where highs are expected to be 20 to 40 degrees below average.

Damn that climate change. These guys must be sick of the cold by now. Temps that rae minus 30 to minus 40 below, now that sounds more serious than the average temp in NZ over the last few years being 0.2c? above average.

Of course the Global Warming brigade would rather have trembling in fear over warming rather than talking of how everything will be trembling when things start cooling, as they will.

Of course with warming you get to grow much more diverse crops than normal, yes there will be droughts, but it will rain in other places. With the cold you can’t grow anthing can you, in fact with Chimneys being taken out of many a home due to the angst over fossil fuel burning, how is one to warm their families and cook food when the grid goes down?

I think there is much to fear over climate cooling as the media in the 1970’s spouted, rather than any rise in temps which is trundled out due to its money making stardom for governments.

Get the picture yet??

I feel sorry for thos epoor buggers freezing in the US.