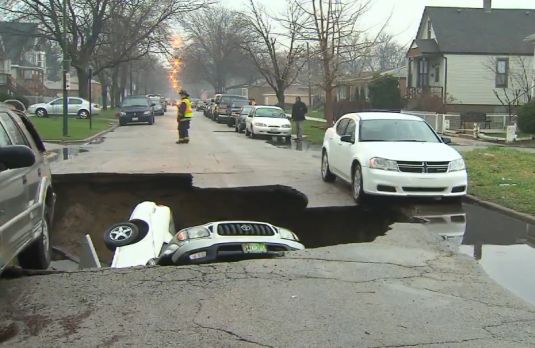 After a year of record-shattering drought in the US, this spring is seeing some of the worst flooding 20 years.

Since the middle of the week, heavy rain has deluged parts of the north-central United States.  At least 6 states have been affected.  Road closures and emergency evacuations have been necessary in some areas.

Chicago, one of the largest cities in the United States, was particularly hard hit.  The Weather Channel’s Julie Martin reported that earlier today, roads were not passable through many Chicago area communities.

Heavy rain in the Chicago area even ripped open a sinkhole on Wednesday large enough to swallow three cars.

Six-inch rainfall totals were reported in multiple areas across Illinois, and parts of neighboring states received more than a half-foot of rain. Friday morning, around 50 river gauges were in major flood stage across five states: Missouri, Iowa, Illinois, Wisconsin and Indiana.