Unsettled week on the way 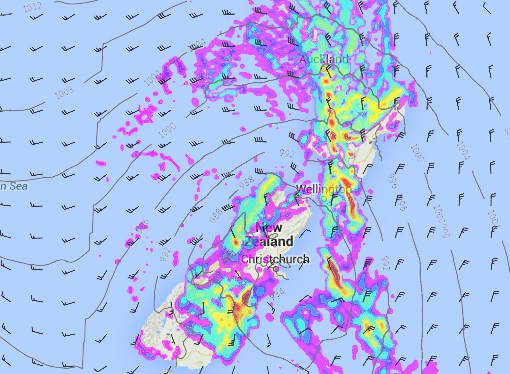 This coming week is certainly looking unsettled, weâ€™ll have periods of mild weather followed by west to southwesterly changes usually bringing rain then showers for most. Itâ€™s not looking all that cold though, in fact milder in general overall then it would normally be at this time of year. It will certainly be windy for some.

On Tuesday we have a strong west to northwesterly airflow over the North Island bringing showers then rain in the west, thunderstorms are possible too with heavy falls. Showers spread out to all eastern regions too then easing for all in the afternoon clearing for most in the evening. The South Island has a low pressure system move over it during the day, some rain moves northwards through Canterbury and Marlborough during the day with a southerly change, rain or showers in the west clear later in the day. Remaining fairly dry over Southland and Otago with only the chance of a shower or two although North Otago may pick up on the influence from the southerly change a little further north.

Wednesday brings a slight reprieve from unsettled conditions, spells of rain continue for the West Coast of the South Island otherwise elsewhere will see some sun. Winds are generally west to northwest over the whole country.

Finally at the end of the working week we have a fairly large low sitting in the Tasman Sea churning away, expect showers for much of the upper North Island in a northerly airflow. Drier further south. The South Island has light winds for many regions, dry too although the West Coast sees some rain. Southland and Otago have a southerly airflow, this brings some morning rain which eases in the afternoon.