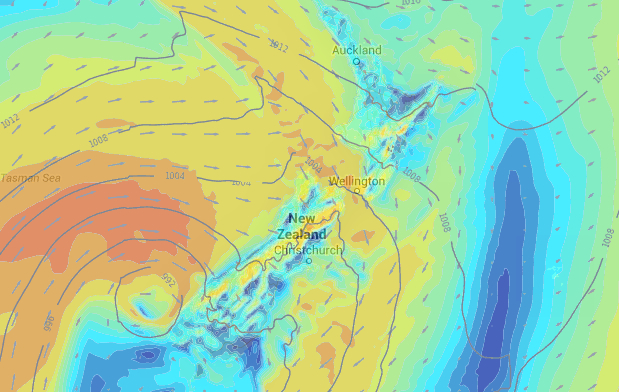 As we mentioned yesterday, we have a textbook spring pattern to the weeks’ weather, and that all kicks off today – with the approaching low pressure system in the Tasman finally makng landfall on the west coasts of both islands.

This will bring rain relief for many dry regions, after several weeks of little to no rainfall – particularly in the South Island.

There will be a period of rain in the morning for the West Coast, as the low sits south of the country; southerlies will follow as the system moves further to our east – and with it some cold showers for eastern parts of the South Island.

The morning will be a wet one for the North Island’s western and central areas, but those showers will clear up into the afternoon and leave some west to south-west winds in their wake.

For Wednesday, it’s looking like a wet one for the likes of Otago, Canterbury, Wellington and Wairarapa, as that low pressure system finally bids us goodbye, while the other side of the country stays in the grip of warmer westerlies, meaning a mild midweek for most of the North Island.

For election day itself (this Saturday) the forecast is a wet and windy one for some areas â€“ weâ€™ll fine tune this forecast in our weather updates later in the week.