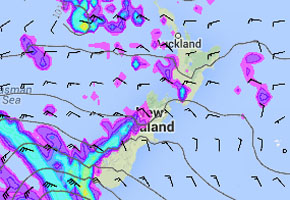 A westerly airflow lies over the country tonight with high pressure north of New Zealand and low pressure to the south. Mainly settled overnight. Some cloud and the chance of a shower in the west, mainly for the South Island’s West Coast.

Western North Island
Cloudy spells with west to northwest breezes, chance of a brief shower now and then.
Low tonight: 8-9