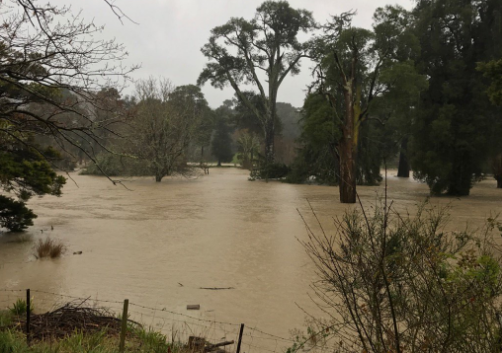 The wintry blast affecting much of New Zealand, especially the North Island, is showing some small signs of easing. In the past hour winds have failed to gust to 100km/h in Wellington City after a day of gusting to 115km/h at the airport.

While gale force southerlies continue the peak winds are easing and as we forecast earlier today we expect conditions to drop to ‘normal Wellington levels’ tonight. In other words, winds shouldn’t be damaging and flights should be able to resume. However with so many flights cancelled it’s unlikely that flights will resume properly today.

Wind gusts at Wellington Airport in the past 10 minutes have all been in the 80km/h range.

So, what happens now?

Sadly while the winds ease the rain and snow does not. More heavy rain, heavy enough to cause flooding, will continue in Wairarapa and gradually (on Friday) slide northwards into Hawke’s Bay. It’s only a very narrow band of rain – but it’s intense and slow moving.

Snow levels have been lower today than forecast, mainly due to the southerly overpowering the wet easterly. The ‘squash zone’ (between the North Island low and the Tasman Sea – where the isobars bunch up on the weather maps) remains over Cook Strait to Taranaki, but as head weather forecaster Philip Duncan said in his video today much of this energy is sliding out to the Tasman Sea and therefore not bringing serious conditions further north.

Auckland wrongly injected into the news
Across today the second Government forecaster New Zealanders fund with their taxes, NIWA, had “dire” warnings for Auckland – which then failed to eventuate. WeatherWatch.co.nz said this morning that Auckland would unlikely get much rough weather today, but that it would be wintry. While winds did reach gale force on the rural Manukau Heads out towards the airport the city has been a little windy with cold light rain. Hardly “dire”.

Gales may well continue for a bit longer in rural parts of Auckland but this is normal wintry weather, not severe. A few isolated power cuts may occur, but that should be about it.  The weather is not even currently affecting flights at the airport (but flights are cancelled or delayed due to conditions elsewhere).

NIWA is a government Crown Research Institute funded by all New Zealand taxpayers and is oddly commercially taking on another Government agency all taxpayers also fund, MetService.

A set up like this exists no where else on earth and it’s not making for more accurate information to have two tax funded agencies trying to get the most dramatic headlines, as demonstrated yet again today when Auckland media outlets headlined this.

Auckland did make some actual weather news today though – it was colder in Auckland than it was in Invercargill and Greymouth this afternoon, which is unusual considering Auckland is 1500kms closer to the equator – but shows how much cold energy there is over the North Island right now.

In our view at WeatherWatch.co.nz the focus today should have stayed on Wellington and snow affected areas – not easy clickbait in our largest city.  NIWA receives over 100 million a year and the Government is yet to explain why they have allowed the CEO John Morgan to target another Government Agency. Imagine if we tax funded two police forces with different rules?

TONIGHT:
The low drifts towards Auckland from Hawke’s Bay (yes that is incredibly unusual but does sometimes occur). As it moves in the winds will be nudged away from the city and – much more importantly – these winds will slowly ease in Wellington, where the focus should have been all day.

Rain will continue in the same areas as today, as will the showers and snow.

FRIDAY:
WIND
Winds ease further in Wellington. Flights will be able to resume however please note with such a huge backlog there will be further delays – but the weather will start to play kinder to air travellers across Friday with winds completely fading out by Friday night/Saturday morning. It will be quite a dramatic change to Thursday!

RAIN:
Unfortunately the rain doesn’t ease so fast – and what many may not realise is that this rain is heavy because it’s sub-tropical. It’s being fed from north east of NZ and then meets the cold southerly – turning the heavy moisture to snow. It’s why we’ve seen snow to such low levels around the North Island: Cold air + moisture = heavy snow.

On Friday the only positive is that this narrow but intense band of rain will slide northwards from Wairarapa to Hawke’s Bay, then into Gisborne overnight and finally fall apart and move mostly back out over the Pacific Ocean.

More flooding, sadly, is likely for farmers and growers on the eastern side of the North Island over the next 12 to 18 hours.

TRAVEL ON FRIDAY:
Flights should start to get back to normal, although some flights may still be impacted by weather in the east and central parts of the North Island and about Wellington. The smaller the aircraft the higher the chance the weather will affect you.

Conditions improve by Friday night but black ice will be a major issue so more closures may occur at night. The weekend, however, looks much better for motorists with the exception that Saturday morning will see sub-zero temperatures in both islands and heavy to severe frosts plus black ice on the roads (black ice is water that freezes on black highways and is impossible to see as it looks like the road – but is as slippery as an ice skating rink).

We’ll keep you posted into Friday – and our updates on this event will then scale back.

75 mls since 3am this but no sign of rain stopping pic.twitter.com/A0hSi9u9Sx

I couldnt go for a walk in the park , it WAS to STORMY, I enjoy weatherwatch but this is a widespread storm, and it seems like you are trying to make a point to the government forecasters and not looking after the people that follow your forcasts, This seems like Cyclone Cook forcasting by Metservice but in reverse

Good evening,
Sorry you couldn’t go for a walk in the park. As I (and WW) have been saying all week, this isn’t a storm – but that locally (within regions) there would be ‘stormy’ conditions producing some severe weather. If we called every severe weather warning a storm we’d very quickly be told we’re like the rest of the media and all hype. Not calling it a storm doesn’t devalue the fact that weather can be severe in places due to New Zealand’s geography. We forecast the snow on Central Plateau highways well before the others and many farmers in the South Island told us we were fairly accurate for them. ‘Storms’ (with gale force winds that wrap all the way around them, unlike this system) usually cause widespread signifiant damage and if you watch my videos from Monday to today and read our news updates you’ll see we explained in quite detail what to expect. Of course we may not have picked all of it but we do our best to help people calmly understand what is happening. There has been some bad flooding in Wairarapa – and more flooding likely with more heavy rain coming overnight and on Friday.

Again, sorry you couldn’t go for a walk in the park – and we’re glad you enjoy our free service.
Cheers
Philip Duncan

One of my son’s coming up by bus if roads are passable Saturday! Hope to see him!

Good evening Zelda,
The forecast looks very promising BUT (and yes it deserves all caps) there may be significant black ice. Depends on how fast the road crews can get things cleared, melted, opened up, but if you’re flexible with what time you meet him on Saturday then we think there’s a very good chance he’ll get there by then 🙂  Have a wonderful weekend!

Thanks Phil for your reply.
ps Site portraying well now!

Im confused as to why you did not call this event a storm? Cause it was. Definition of storm: a disturbance of the normal condition of the atmosphere, manifesting itself by winds of unusual force or direction, often accompanied by rain, snow, hail, thunder, and lightning, or flying sand or dust.

If thats not a storm, i dont know what is.

Hi there – totally fair enough! Basically because an actual storm in meteorological terms has gale force winds ALL the way around the low’s centre. This one only has storm force winds in about a quarter to one third of it, if that. In fact, if there was no high pressure system to New Zealand’s east we wouldn’t have ANY gales or even the same level of snow and rain…so that already highlights this isn’t a storm.

If we call every localised severe weather event “a storm”, it takes away from an actual storm that does have damaging winds in all 4 directions and damages many places. This event has not caused widespread damage, it’s caused pockets of problems.

Snow in winter isn’t a storm either.

So basically if we do what the others do and name every rough weather event a storm it takes all the oxygen away from an actual storm that might take lives and cause much more damage. A true storm would see widespread damage and widespread flooding. This has not been the set up today. Snow closing highways and flights is a different category to the actual weather reaching a certain level of power where lives can be impacted.

It may be splitting hairs, but when the NZ Media and Government forecasters say every localised event is now a storm (which throughout history they didn’t do until literally this decade) we feel the need to reserve that word for truly life threatening and damaging set ups on a national scale.  Also, in international circles, this isn’t a storm.

In saying ALL of that I can totally understand where you’re coming from though – but we need to hold firm and reserve the word “storm” for truly nationwide systems that make today’s weather look like a walk in the park.