Sydney’s hottest summer in over 150 years 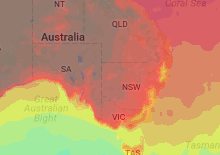 Sydney just endured its hottest summer in more than 150 years, setting a number of new records relating to heat.

The hottest season since record-keeping commenced 159 years ago included an unprecedented 26 days at or above 30 degrees in the city and 11 days over 40 degrees in Richmond.

The city also achieved new highs in terms of average minimum (20.9C), average maximum (28.7C) and combined average (24.8C) temperatures during summer. All three of these values were an impressive 2-3 degrees above the long-term average.

The city’s 319mm of rain during the season was close to the long-term summer average, although most of this fell during the final three weeks of February.

Autumn is expected to be warmer than usual in Sydney. Rainfall should be near-to-below average despite a wet start this week.