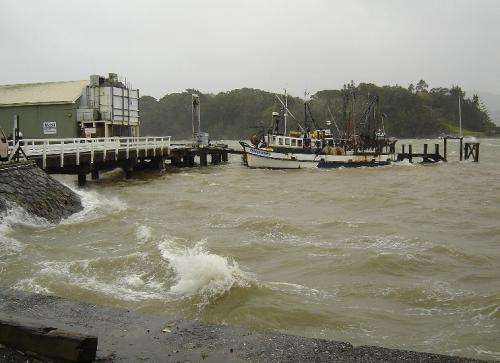 Cloud has spread across the east coast of New Zealand from Otago to East Cape as the weekend’s storm moves out into the Pacific Ocean and away from New Zealand.

Winds have eased almost everywhere and will continue to do so today ahead of a frontal system moving in from the Tasman Sea tomorrow night.

About 100 homes and businesses are still without power as the Far North recovers from a weekend of heavy rain and wind gusts reaching up to 140km an hour.

More than 18,000 people were left without electricity and firefighters were inundated with calls about fallen trees and lifted roofs after the storm hit on Friday night from Northland to Waikato.

Trees brought down power lines in the Coromandel and fell on to roads in the Far North, Whangarei, Rodney, North Shore, Coromandel and Waikato districts, said the Fire Service.

In all, firefighters responded to more than 100 weather-related calls, including roofs lifted from homes in Kerikeri, Mangawhai, Snells Beach and on Waiheke Island and a carport entangled in power lines in Whangaripo, near Matakana.

He said at the height of the poor weather, 12,000 homes and businesses were without power.

Mr Gilby said the last 100 or so should be restored by lunchtime.

Vector spokeswoman Philippa White said at the peak of the weekend’s weather there were about 5000 homes and business without power but most of them had been restored.

Ms White said there may be some pockets still without power and she encouraged those people to get in touch with Vector.

All homes and businesses covered by North Power have been restored, apart from six customers.

North Power network general manager Ritchie Dempster said six customers were without power because of their private network and the company was helping them get back on the grid.

Phone lines were also cut during the storm and “wire snaps” at 175 Northland homes could take several days to repair, a Telecom spokesman said.

The weather has also caused problems on the roads with part of State Highway 10 in the Far North collapsing under the weight of a major landslide.

Police were alerted to the slip when a truck nearly rolled off the road about 6am today, Senior Sergeant Shane Mulcahy of northern police communications told NZPA.

The highway was now closed and roading authorities were making their way to the scene.

Further South, the Desert Rd has been closed due to snow and ice and some of the South Island passes were also due for a light dusting of snow.