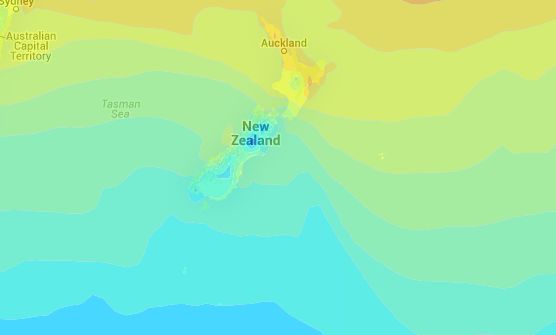 Updated — Those in the lower South Island have had an incredibly slow start to summer although the good news is that WeatherWatch.co.nz is now predicting more “summer-like” days as highs start to push in over the South Island too.

However between these summer highs we’re still seeing southerlies hit the South Island – at least once per week.

Once again the southerly this week is dredging up cold air from near Antarctica.  This means a dusting of snow is likely, yet again, for the tops of the ranges and highs will struggle to even reach the teens at sea level.

“Highs on Tuesday will be in the 20s for many South Island centres, by Wednesday places like Dunedin, Invercargill, Gore and Queenstown will be stuggling to reach a high of 13 degrees” says head weather analyst Philip Duncan.  “The good news is that while we still are seeing these cold snaps they are becoming less frequent with more hot days in between”.

The change for Christchurch will be even more dramatic, going from an expected high of 31 degrees on Tuesday to just 16 on Wednesday.  However if the nor’wester fails to arrive until evening, then a high in the late 20s is more likely.

WeatherWatch.co.nz, which prepares monthly forecasts for Fonterra, says the month ahead still sees a lot of life in the tropics and Southern Ocean but that the trend for northern areas may be one of hotter and drier conditions this month and for southern areas still unsettled with more hot days but still a cool to cold snap about once a week, at least for the first half of the month.

It has been an ordinary summer so far for the south. I see in this story you say a high of 31 in Christchurch for Tuesday and yet the forecast section says 27?

Fair enough!  Apologies, this story was written late yesterday for this morning and there has been a shift in temperatures – but in saying that, if the winds pick up it may hit 30 in some parts near Chch (or in Chch) late afternoon.  But that will ONLY happen if the nor’west wind makes it to the coastline…at the moment it may not arrive until too late in the day, which is why we’ve shifted out high down a bit. It’s always the timing of the nor’wester and the strength of it that determine how hot it will get – it’s a bit like predicting how far up a beach one particular wave will go!