She’s gonna be warm out east 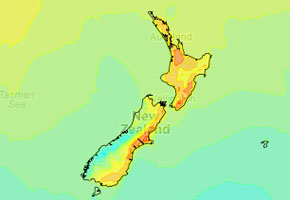 With a northwesterly airflow building over the country ahead of a front to the southwest, there are likely to be warm temperatures for the east coasts of New Zealand today. The likely candidates for the warmest temperatures will be Canterbury, Marlborough and Wairarapa.

Hawkes Bay and Gisborne will be warm also however the winds will tend northeast for a bit longer during the afternoon preventing warmer northwesterlies tell later in the evening. Otago at the other end is likely to get northwesterly winds however some developing high cloud will hinder temperatures reaching their full potential.

So to be more specific Canterbury and Marlborough are most likely to see high’s ranging from 24 to 26 degrees. You never quite know with northwesterly winds though, there could perhaps be a brief moment where temperatures peak at 27 or even 28 degrees so something to take note of. Wairarapa will reach around 24 degrees.

For the Upper North Island conditions are likely to be rather nice today also, maybe not as warm but still up around 20 to 23 degrees with mostly sunny skies so nothing to sneeze at.

Yes there has been sunnier weather in Blenheim and with no high cloud about to put a cap on temps it’s a really good day in Marlborough.

Christchurch may not get as high today with a fairly persistent easterly breeze which may not ease off till late afternoon / evening. Some high cloud is starting to increase also.

The Amuri area would’ve got warm today though I’m guessing in the mid to high 20’s, only information there has come through from my Dad who lives up in Waiau but no official temp gauges. It would be an area less likely to get the east to northeast breeze like chch does also, more likely to get a NW.

Not far off Michael 🙂

I saw it went to 19.5 and some eastern suburbs hit 21 degrees by the looks. Perhaps right on the west coast high’s were about 18 with more cloud about and being hit by that SW breeze strait off the sea brings temps down.