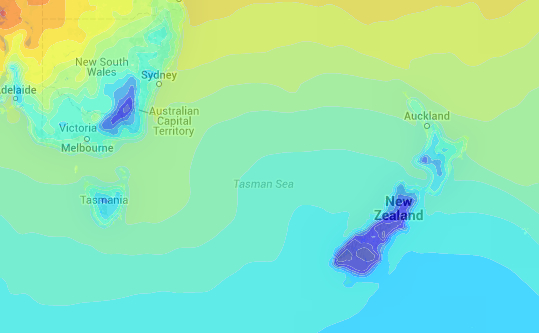 It’s looking like our current weather pattern, sitting in between two anticyclone systems to the east and west, will continue through the weekend – meaning relatively calm, settled conditions for the weekend.
The first half of next week is looking good too, with a large high on the way early on, meaning most of us can look forward to some spring sunshine.

Saturday is shaping up to be settled in the North Island, with sea breezes and light winds on the coast, and a possiblity of some showers inland, especially about the hills and ranges – but these should be relatively short-lived.

The top of the South Island, as usual, is looking nice and sunny, with some light winds for Marlborough, Nelson and also on the east coast.
As with the North Island, however, inland hills and ranges can expect the odd isolated shower towards Saturday afternoon.
On the West Coast, sunny spells and northwesterlies will be interspersed with some showers south fo the glaciers, and of course, rain in Fiordland.

Southland and Otago can expect a few isolated showers towards evening in the east once again, but other than that it’s looking like sun with intermittent cloudy patches.