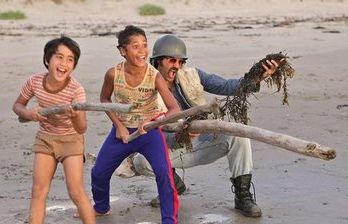 Debris and parts of containers from the Rena have washed up on East Cape beaches while concerns continue to grow for wildlife in the area threatened by the slick.

Defence Force staff were yesterday combing shorelines from Te Kaha in the Eastern Bay of Plenty to Te Araroa for debris from the container ship, which crashed into the Astrolabe Reef on October 5.

The Rena has spilled more than 300 tonnes of oil since its grounding.

Hicks Bay locals reported oil covering the rocks at Matakaoa Pt while others encountered oil and debris coming ashore at Waihau Bay, where the hit movie Boy was filmed.

Boy director Taika Waititi could not be contacted last night, but posted a sarcastic message on Twitter.

“Great! Rena oil has reached Waihau Bay along with other junk from the ship. Nice rapid response cleanup guys!”

A Maritime New Zealand spokesman said the oil-covered debris was appearing sporadically around the coast although the bulk of the slick remained offshore.

The spokesman said heavy seas would help to emulsify the slick but MNZ was preparing for a possible on-sea recovery, which could see staff travelling out to sea to scoop the slick up.

Forest and Bird spokeswoman Karen Baird said the area from Te Kaha to the East Cape was a “hot spot” for feeding seabirds where oceanic currents eddy and provide rich feeding grounds for marine life, including seabirds and whales.

“It’s a very, very important feeding area – we’d be looking at birds like black petrels that come across from Great Barrier Island, cookilerias, flesh-footed shearwaters … all of New Zealand’s albatross species feed in there at one time or another.

“So you’ve got this whole range of seabirds at this hotspot for feeding – that’s a real concern for us.”

Seabird researcher Chris Gaskin feared that because the birds were feeding offshore, many that could be affected might never be discovered.

He said the wildlife centre in Tauranga had about 1200 dead birds but it waslikely that more seabirds were being affected.

Te Runanga o Te Whanau a Apanui chief executive Rikirangi Gage said there were fears for his iwi’s commercial crayfishing operation but also for many of its peoplewho depend on their shores for their kaimoana.

He said about 500 volunteers were on standby to help.

Gisborne Civil Defence emergency management group spokesman Richard Steele said the army was helping with the clean-up and protective gear for volunteers had been sent to the East Cape.

“Obviously there is a current that has brought these containers around but I don’t think there’s any significant amount of oil left out there at this time to cause any real problems unless there’s another spill.”