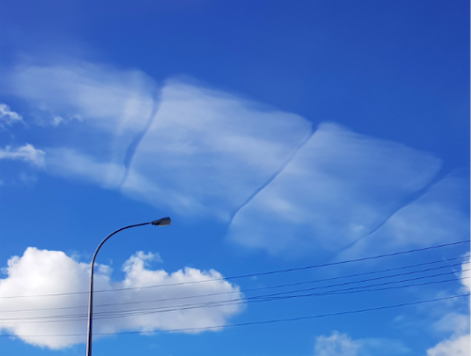 An unusual area of high cloud has been spotted over Northland and it’s stumped some meteorologists about how it specifically formed. People have commented on how it looks like bones from an X-ray.

The rare and unusual high cloud was spotted over Whangarei, Northland in northern New Zealand late on Sunday afternoon. 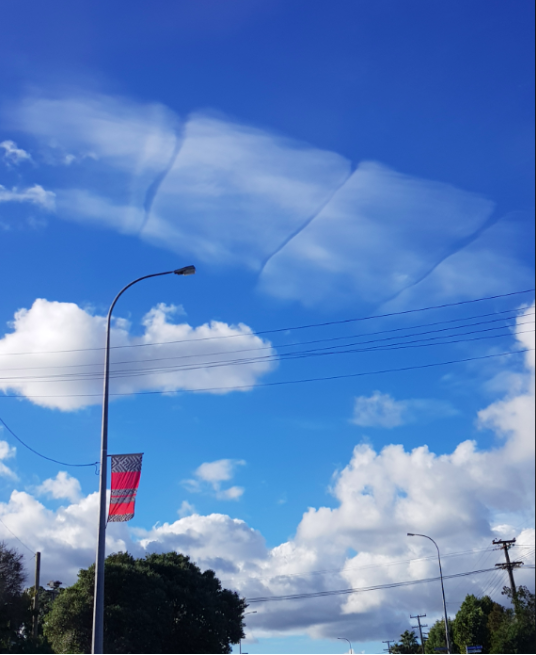 On our WeatherWatchNZ Twitter page Les Gates contacted us with a similar photo. “What causes these clouds? Seen over Ngararatunua, Whangarei this evening”. 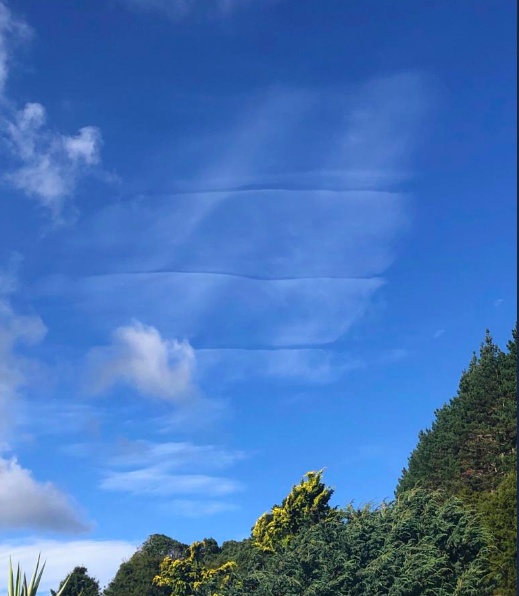 WeatherWatch.co.nz was also stumped by this cloud, so we asked around. Meteorologist and retired MetService Ambassador Bob McDavitt told us it’s an “Altocumulus cloud that is often found downstream from a mountain range”. On Sunday high pressure was pushing over Northland while an offshore low nearby out to sea was producing varying degrees of high cloud. Potentially the hills/ranges around Whangarei helped create this.

But what about the lines through it?

“The ‘ribs’ are likely formed by vertical turning over within the cloud itself. Maybe they are spaced so far apart by the cloud moving over something fixed [like ranges] that is affecting it. Hard to give any more details.” McDavitt said to WeatherWatch.co.nz.

Dave Hennan, a Senior Meteorologist at CNN Weather in Atlanta told us he wondered if the lines through the clouds were possibly due to aircraft flying over Northland, which is far more standard practice in America. “Looks like contrails from planes through a cirrus layer, or some sort of wave through a cirrus layer”. While a great suggestion research by WeatherWatch.co.nz shows little air traffic at the time and while Northland does get the odd flight tracking over it from west to east it’s highly unlikely this was caused by planes.

Finally, people often ask us if these are Chemical Trails sprayed from planes. However there is ZERO evidence of any chemtrails in New Zealand and the main issue with this is that it’s not leaving a trail at all – it’s simply clear lines through very high cloud.

WeatherWatch.co.nz asked the World Meteorological Organisation (WMO) early this week for their thoughts but so far they have not responded to our request.

It appears Mother Nature has created a brief moment of “cool clouds” due to large high pressure in the area and offshore low pressure. WeatherWatch.co.nz head forecaster Philip Duncan says cloud patterns are often similar to that of sand patterns under the water at your nearest beach. “When you look down in the water you’ll see some really interesting patterns in the sand caused by currents and the rocking motion of the ocean itself. High clouds and air movements can cause similar patterns above us in the sky and sometimes they do stand out from all the other usual patterns”.