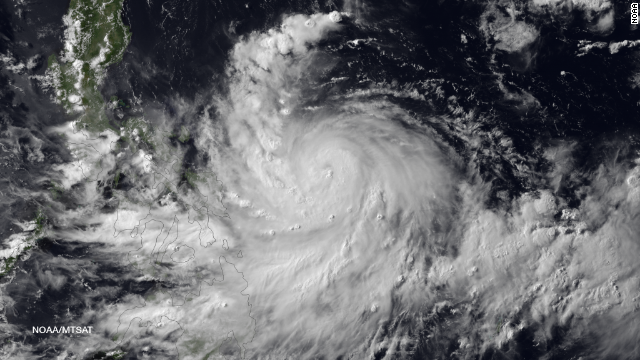 The Philippines’ first major typhoon of the season has churned across the country, passing close to the sprawling capital Manila on Wednesday and killing at least five people.

Typhoon Rammasun made landfall near Legazpi City on the country’s east coast late Tuesday. The typhoon, known locally as “Glenda,” prompted the evacuations of as many as 350,000 people from their homes in towns and cities across the country.

Maria Ressa, Editor in Chief of the online news agency Rappler in Manila, said Wednesday morning that conditions in the city were extreme, with howling winds and strong rain. Several roofs had been ripped off by powerful winds.

At about midnight Tuesday, the government announced one casualty — a person killed by an electrical post that was uprooted. Four other deaths, including a family of three in Lucena city, Quezon province, were announced by the National Disaster Risk Reduction Management Council on Wednesday.

The closest the eye of the storm got to Manila was about 25 km south of the city around 7 a.m. Wednesday (7 p.m Tuesday ET).

Maria Ressa, Editor in Chief of the online news agency Rappler in Manila, said Wednesday morning that conditions were extreme, with howling winds and strong rain in the city. Several roofs had been ripped off by powerful winds.

At about midnight Tuesday, the government announced one casualty — a person killed by an electrical post that was uprooted. Four other deaths, including a family of three in Lucena city, Quezon province, were announced by the National Disaster Risk Reduction Management Council.

Heavy rain continues in the capital, which is expected to taper off towards the late afternoon.

Intense rain and storm surges are still a concern for the city, as are the knock-on effects of the rain, including flooding and landslides.

Marco Savio of Plan International spoke to CNN from Makati, Manila’s business district early Wednesday morning. He said that, at that time, more than an inch rain was falling per hour in the city, many areas of which are susceptible to flooding.

“(The) majority are living in areas prone to floods. Schools are closed, offices and buildings (are) closed.”

Worst over for landfall city

As the storm passed Legazpi, James Reynolds, a freelance videographer who spent the night in the city, ventured out and saw what he described as a “community effort” to clear the fallen trees and power lines, and repair some of the property damage.

“The buildings made of solid concrete are OK, but a lot of buildings, windows have been blown out, doors blown out and some of the lighter structures that people live in haven’t fared so well but generally its not as bad as it could have been” he told CNN.

The storm explosively intensified just before landfall into a much stronger system. It was expected to be of Category 2 strength but upon hitting land turned into a Category 3 storm, with sustained winds of 205 km/h (127 mph).

“People in this region have really been on edge since the events of Haiyan,” Reynolds said. “The problem with this storm is that it seems to have caught a lot of people off guard.”

As the typhoon passed, he said that the anticipated storm surge in Legazpi “hadn’t been an issue.”

The storm cut across the main island of the Philippines, hitting numerous population centers across southern and central Luzon. 11 provinces lost power although some were cut off for precautionary measures.

The Philippines is hit by an average of eight or nine storms a year. Last year’s Typhoon Haiyan killed more than 1,800 people and caused widespread destruction.

As the storm continues on past the Philippines, conditions over the South China Sea favor intensification. The storm is likely to be a category 3 — or potentially upgraded to a category 4 — as it gains strength over the sea as it nears southern China.

Some weakening will occur, but assuming the storm remains over water, the system should still be a typhoon when it makes its final landfall near the Vietnam-China border the following day.