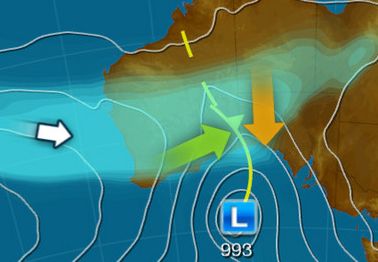 It was a very wet Friday morning in Perth as 24mm fell to 9am, marking their heaviest fall since August of last year.

As the cold front swept through Perth in the morning, it dropped a torrential 8mm in 10 minutes just as everyone was arriving at work, no doubt catching a lot of people off guard.

It also caused a damaging tornado.

It was Perth’s wettest day for May in four years.

Elsewhere in the southwest of the state, even higher falls were recorded. An almost tropical downpour of 52mm was recorded at Donnybrook to 9am, their heaviest in six years. Windy Harbour was drenched with 44mm, a two year record.

The front also brought strong winds, averaging 30-50km/h for much of the southwest and gusting up to 85km/h at Rottnest Island.

As Perth was blanketed with cloud all night, the overnight temperature was kept at 16 degrees, much warmer than the eight degrees the night before. During the day it only managed to climb another three degrees to 19 which is the coldest the city has been since last October.

A high pressure system will now push in from the west, allowing rain and winds to ease this weekend.

Meanwhile the ABC is reporting a tornado has damages dozens of homes in Perth on Friday morning.