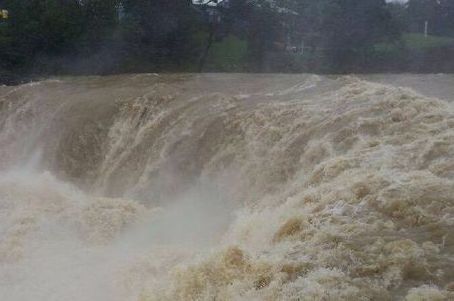 Emergency services are scrambling to search for a woman who has been swept from a tree near Haruru Falls in Northland.

Coastguard Northern Region spokeswoman Georgie Smith said they received a call from Northland Fire Service around 6.30am to assist in finding a woman who had been swept from a tree near the falls.

Just In — The Coastguard Bay Rescue vessel was searching the mouth of the Waitangi River for the woman, she said.

“We were advised at 6.45am this morning by Northland Search and Rescue who requested our Coastguard rescue vessel called Bay Rescue – to start searching around the Waitangi River-mouth area,” Coastguard Northern Region spokeswoman Georgie Smith said.

“We were told they were searching for a woman who had been swept away who had originally been reported [as being in] a tree up the Haruru Falls.

“Bay Rescue are working with Paihia Fire [Service] who we believe are on a jet ski and Northland SAR who are land based,” Ms Smith said.

“Bay Rescue is unable to get under the bridge there due to high tide, large amounts of debris and flood waters, however they’re continuing to search around the river-mouth.

“It’s confirmed that they’re searching for one person, but we believe there may be possibly four people in trouble.”

– Image / Bay Rescue are working with Northland SAR to search for a woman who has been swept from a tree near Haruru Falls. Photo / Coastguard Northern Region via Facebook