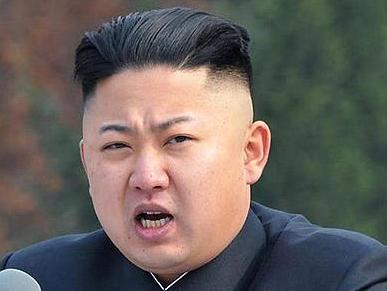 Don’t you hate it when the weatherman gets it wrong? Apparently, so does Kim Jong Un.

According to state-run newspaper Rodong Sinmun, the North Korean leader has been touring meteorological facilities in his country complaining that there are “too many incorrect” weather forecasts.

As further proof of the supreme leader’s extreme displeasure, the Rodong Sinmun report includes photos of a red-faced Kim chastising what appear to be sheepish meteorological personnel.

The wording of the report is a little unclear at times, but it claims Kim’s concerns about the weather relate to its potential impact on the economy.

Blaming outdated equipment and scientific method, the young leader stressed a need for accurate forecasts to protect people’s lives and property from “abnormal climatic phenomenon” (sic) and to safeguard industries like agriculture and fisheries from natural disasters in a timely manner, according to Rodong Sinmun.

North Korea has suffered severe food shortages under the rule of the Kim family. In May, state media reported that the reclusive country was experiencing its worst spring drought in more than 30 years, damaging thousands of acres of staple crops.

Around two-thirds of North Korea’s 24 million people face chronic food shortages, which are exacerbated by floods, droughts and mismanagement, according to the United Nations.

More than one in four North Korean children are stunted from chronic malnutrition, the organization said last year.